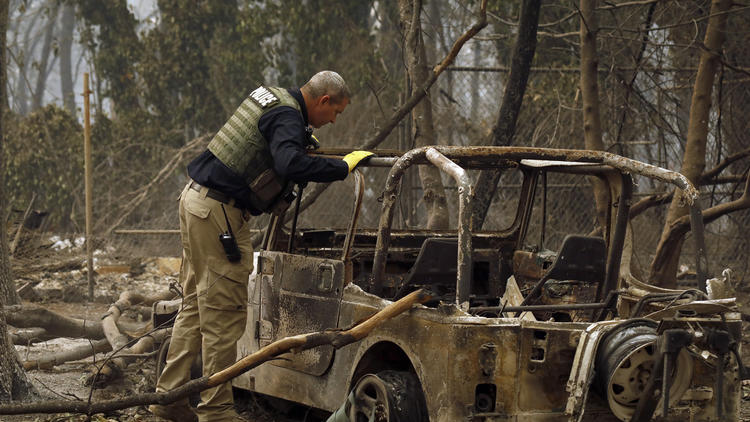 President Trump plans to visit California on Saturday “to meet with individuals impacted by the wildfires,” a spokeswoman said on Thursday.

The White House has not yet given details on where Trump will go, what he will do and whom he plans to visit. During visits to other natural disaster sites, Trump has focused on meeting with first responders and public officials, and has had less direct contact with victims than his predecessors.

This will be just Trump’s second visit to the nation’s most populous state since his election. His first California visit, which he made in March to inspect border wall prototypes in the San Diego area and to attend a fundraiser in the Beverly Park home of Edward Glazer, the co-chairman of the Tampa Bay Buccaneers professional football team, came later in his term than for any White House occupant since Franklin D. Roosevelt.

Trump has had a particularly combative relationship with California, over environmental, immigration and other policies. The state’s Democratic leaders, including Gov. Jerry Brown, House Minority Leader Nancy Pelosi of San Francisco, Rep. Adam Schiff of Burbank and Rep. Maxine Waters of Los Angeles, have been frequent Trump targets and, to varying extents, the faces of the resistance to him.

Trump renewed tensions in the midst of the wildfires with accusatory tweets that angered many in the state.

Last weekend he wrote, “There is no reason for these massive, deadly and costly forest fires in California except that forest management is so poor. Billions of dollars are given each year, with so many lives lost, all because of gross mismanagement of the forests. Remedy now, or no more Fed payments!”

Experts called the tweet uninformed. Many politicians and residents called it insensitive.

“This is not a time for partisanship,” Gov.-elect Gavin Newsom responded. “This is a time for coordinating relief and response and lifting those in need up.”

The president of California Professional Firefighters, Brian Rice, called the tweet “ill-informed, ill-timed and demeaning to those who are suffering as well as the men and women on the front lines.”

“At this moment, thousands of our brother and sister firefighters are putting their lives on the line to protect the lives and property of thousands,” Rice added. “Some of them are doing so even as their own homes lay in ruins. In my view, this shameful attack on California is an attack on all our courageous men and women on the front lines.”

Trump softened his tone in a public appearance on Tuesday, saying that “we mourn for the lives lost and we pray for the victims of the California wildfires.” Saturday’s visit offers an opportunity for further reconciliation.

Meanwhile, lawmakers in Congress have begun debating how and when to send supplemental disaster relief to assist in California’s recovery. Members in both parties have dismissed the president’s tweeted threat to revoke funding.

Sen. Patrick Leahy of Vermont, the senior Democrat on the Senate Appropriations Committee, said that Senate Democrats will insist that additional California fire funding be included as part of any broader disaster spending package.

“Withholding funds is not a solution and we will fight for it,” Leahy said. “In the U.S. we’ve always come together on disasters. There’s going to have to be money for a number of natural disasters that occurred throughout the country. It’s not just the fires in California. And what I would not agree to is have one face off against another.”

Sen. Richard Shelby of Alabama, the Republican chairman of the Senate Appropriations Committee, said it’s too soon to know if wildfire relief money will be included in a broader, must-pass spending bill in December. He did not echo the president’s call to withhold money from California.

“That is a horrible situation in California and a lot of people are really burnt,” Shelby said. “I would hope that we would consider things on their merits.”

“We want the maximum we can get,” said Democratic Sen. Dianne Feinstein of San Francisco.

The president already approved a disaster declaration for California, making federal funding available for the recovery efforts of Butte, Los Angeles and Ventura counties last week, but such funding is just the first step in addressing the state’s needs.