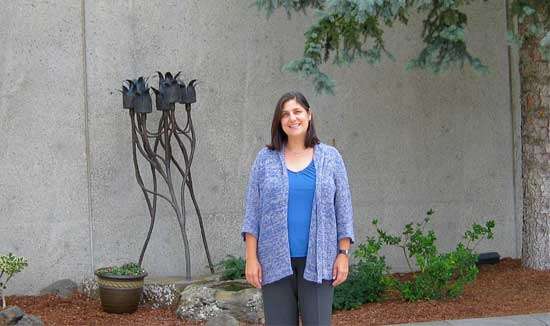 Rabbi Tamar Malino is full of hope and optimism. She has started a new life in Spokane, WA after leaving San Diego in 2008. She still has fond memories of her former congregation in Poway where she was both assistant Rabbi and Rabbi at Temple Adat-Shalom.

In 2008, Rabbi Tamar and her partner, Rabbi Elizabeth Goldstein moved to the Bay Area with their children, so Rabbi Elizabeth could finish up her PHD in Religious Studies and write her dissertation. At that time, Rabbi Tamar worked at the Peninsula Jewish Community Center. In 2010, Rabbi Elizabeth was offered a full time position at Gonzaga University to teach classes in Bible and Ancient History, so the family all moved to Spokane, WA. They felt it was the right time to move on.

Life in Spokane has been an adjustment as both Rabbis were used to living in more cosmopolitan areas. On the one hand, Rabbi Tamar likes raising her children in a safe, small town environment. However, there is also the lack of cultural diversity, and the fact that the Jewish community is so small. Rabbi Tamar estimates that there are approximately 500 Jewish families living in the Spokane area. She hopes that as her children get older, being a minority will have a positive effect on them as she feels it will be important for them to stay connected to their ethnic community.

Continuing her work serving Jewish communities, Rabbi Tamar now works as the executive director of the Spokane area Jewish Family Services. It is a small agency that is mostly a social service agency providing help and guidance for seniors, such as personal care, social events, etc. They also serve families in Pullman, WA and Sandpoint, ID.

As of now, Spokane has only one temple, Beth Shalom, led by Rabbi Michael Goldstein. It is a conservative temple, and about 10-12 years ago, members who were more reform minded left to form their own Havurah. They started as an informal group, meeting at the Unitarian church where they rented space.

Over the years, they have become more formalized, and brought in their own Torah. They are now known as congregation Emanu-el. They had rabbinical students who would come once a month to provide leadership. Although there were and are serious issues that divided the groups, because Spokane has such a small Jewish community, they also remained connected.

When Rabbi Tamar and her family went to Spokane, they connected with both Temple Beth Shalom and congregation Emanu-el where she ran the education program for a year. She is fluent in Hebrew. After the last rabbinical student left, she was invited to lead the congregation and now works for them quarter time, holding services two Fridays and one Saturday a month at the Unitarian church where they continue to rent space.

Rabbi Tamar has a full plate, balancing her responsibilities to her family [two sets of twins, ages 3 and 6], her work at JFS, and leading the congregation. However, she handles all the responsibilities with humor and grace. Her desire is to serve and she feels it is important to reach out to as many families as possible in an area where it is easy to feel isolated as Jewish families are in the minority.

Rabbi Tamar does not know what the future will bring, but for now she has settled into her new life in Spokane.

The Plight of Adjunct Teachers