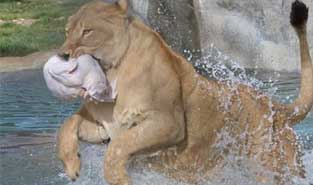 Wild animals should not be behind cages! That might be your first impression when you see the pictures from Lions, Tigers, and Bears, an animal sanctuary in Alpine, Ca. However, did you know that there are more tigers born in captivity than there are in the wild? Did you know that it is legal in some states for people to own certain wild animals as pets? Some wild cats are sold as cubs over the internet to people who have no business buying them. This is where Bobbi Brink comes in. She is their hero. She has made it her life’s mission to save big cats. Although her animals at Lions, Tigers, and Bears might be behind cages, they are all animals she rescued and they have a good life with land to roam on and many dedicated volunteers who help Bobbi care for them. Lions, Tigers, and Bears is a non-profit organization that relies on donations to operate. I wanted to help, so I became a member. Yesterday, I went up to visit for an early Thanksgiving celebration and the magnificent cats were fed packaged turkeys as their prey. At Lions, Tigers and Bears, the animals’ natural behaviors and instincts are encouraged to keep them active and healthy. Lions, Tigers and Bears is one of only twelve accredited Big Cat and Bear sanctuaries in the United States.

This animal sanctuary was founded in 2002 by Bobbi Brink as a no kill, federally and state licensed animal sanctuary. It started as a sanctuary for big cats, but has since grown to include three African lions, four Bengal tigers, one leopard, one African serval, three bob-cats, a mountain lion, and five Black bears. The 93 acre ranch is located in the Japatul Valley. It also has historical roots as it has one of the oldest adobes, built in 1866, and it served as a stagecoach stop.

Bobbi grew up in San Diego, but in the early 1990’s, moved to Texas to open up a restaurant. An avid animal lover who had been around ranch animals all her life, she witnessed the horrific treatment that captive, exotic Big Cats experienced in Texas. She decided to get involved and began working with the animals. She did this for 10 years and earned her exotic animal handling license in 2000, before returning to San Diego to open her own facility. Bobbi has also gotten involved with Tippi Hedren, founder of Shambala [another wonderful animal sanctuary], to further protect exotic cats. In September, they went to lobby in Washington, D.C. where they met with members of congress regarding HR 4122-The Big Cats and Public Safety Protection Act. This bill would outlaw private ownership and breeding of exotic cats in the United States.

Lions, Tigers and Bears also wants to educate, and in addition to the wild animals listed above, there are also assorted ranch animals, including chickens, rabbits, goats, sheep, cows, a miniature donkey, a miniature horse, two horses, a potbellied pig, and two llamas. They are all part of the hands on, educational “Animal Encounters” that teaches humane treatment of all animals.

All this takes money, and Bobbi relies on donations and sponsors. Membership starts at $50 and up, and it entitles you to free, scheduled visits on Tuesdays, Wednesdays, and Saturdays, along with all the latest newsletters. You can also bring a friend for $25 which is much less than other sanctuaries charge. Although I was more interested in the lions and tigers, their newest star attraction is Meatball, the Glendale bear. They are in the process of raising money to build a new and larger enclosure for him. There will be a holiday party on December 8th from 1:00 to 4:00 to raise money for the facility. They will have special vendors there as well as delicious food. Also, they are looking for volunteers to help in many capacities. Please check out their website at www.lionstigersandbears.org

Finally, as I was wandering around the small, but very nice gift shop, I met Tomcat, one of the resident, domesticated cats. He was a feral cat that Bobbi adopted. He is now the official greeter of the place, rubbing up against you and meowing at you, so you will pay attention to him. He is a good reminder of why exotic cats are not pets and if you want a feline in your life, stick to ones like Tomcat or “adopt” one from Lions, Tigers and Bears, and help Bobbi continue her mitzvah.