Inicio Idiomas Book about Kurdish Jews and the Aramaic Language 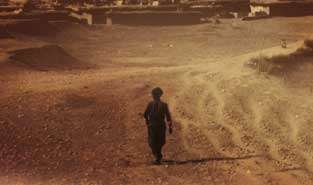 About 15 years ago, a student of mine with blue eyes told me he was a Kurdish Jew. I was surprised because most of my Kurdish students at Grossmont College in nearby El Cajon were Muslim with a scattering of Christians. It turns out I was wrong.

Before the 1950’s when most had to leave, there was a thriving community of Kurdish Jews who lived peacefully in northern Iraq amongst other Kurds, Iraqi Muslims, Chaldeans and Assyrians. I found all of this out when I read “My Father’s Paradise”, a book by Ariel Sabar. This fascinating book is about the life of a Kurdish Jew who was born in Iraq, migrated to Israel, and came to the United States on a full university scholarship. He later settled in Los Angeles where his son Ariel was born.

The book was published in 2008, but I read it in 2009. My interest in this book was renewed when I read something on the Aramaic language, the original language of the Kurdish Jews. Also, as an ESL teacher in East County where there is a very large and diverse Iraqi population [including Chaldeans who also speak Aramaic], I was curious to reread it, and learn more about Iraq with its fascinating and sometimes dark history.

The book is divided into seven sections, and it is many books in one. It is about the life of Ariel Sabar born in Los Angeles to a Kurdish Jew, his relationship with his immigrant father, and the rejection of his old world ways. When Sabar has a child of his own, he is suddenly more interested in his family’s past and like a detective delves into his father’s life, and the life and history of the Kurdish Jews, first in Zahro in northern Iraq, and later in Israel. It is also an immigrant’s tale as Sabar tells the story of his father who left a peaceful life in Zahro when he was 12, during the mass exodus of 120, 000 Jews from Iraq. An interesting footnote is that his father was the last boy to have a Bar Mitzvah in Zahro. It continues with his life in Israel, and how he overcame the prejudice and misery his parents faced there.

The next phase was when he arrived in the United States where he became a noted language professor at UCLA, and published a Jewish Neo-Aramaic to English dictionary in 2002, a lifelong goal. Lastly, it is a book about the Aramaic language, and his father’s efforts to preserve the language. I found this part to be especially interesting as most of my Chaldean students speak Aramaic. Only a few write it. Was it the same Aramaic that Kurdish Jews spoke or a different dialect of the same language? Aramaic is one of the oldest languages in the world, the language that Jesus spoke, and ancestral to the modern Hebrew alphabet.

There were certain passages in the book that I found fascinating. One was about how the Kurdish Jews were the world’s oldest Jewish Diaspora and how they had lived in remote villages alongside Kurdish Muslims for nearly 2,700 years.

Another was about the problems they had migrating to Israel as they were not European Jews, including the “calculations about the relative merits of Jewish immigrants”. Those from Iraq were viewed as backwards and uneducated. Finally, in the last part of the book, Sabar wrote about the Aramaic language and how it had “hopped so many borders, infiltrated so many faiths, and outlived so many empires”. Sabar wrote in a poetic way about it possibly being a dying language. That may be so for the 150,000 Kurdish Jews living in Israel, but I see my Chaldean students teaching to their children, so let’s hope that tradition lives on. I contacted Ariel Sabar via email and asked him the following questions about the book and the Aramaic language.

Q 1] As an ESL teacher, I am very interested in languages and culture. Did the Kurdish Jews speak the same Aramaic as the Chaldeans, or were they two different dialects of the same language?

A: Modern Aramaic — or Neo-Aramaic, as linguists call it — has more than 100 dialects, and the dialect people speak tends to depend both on religion and what village they come from. So Kurdish-born Jews and Chaldeans do speak different dialects, but in all likelihood most would be able to understand one another at a basic level.

Q 2] I read your book in 2009 and skimmed it yesterday to refresh my memory. I have wanted to write something about it for a long time. My older Chaldean students from northern Iraq are always delighted when I lend it to them. The level of the book is a little too high to assign to the class as a whole. How have the Kurds living in the US reacted to your book? I used to have many Kurdish students in the 1990’s, but now I have many more Chaldeans. Because of the mutual language, what has their reaction to your book been?

A: While writing the book, I had no expectation that its readers would extend beyond the American Jewish community. What has pleased and humbled me is the kaleidoscope of readers the book has attracted, who seem to see in its narrative a universal story about immigration, father-son relationships, and the death and resurrection of cultures. What’s been especially cool is hearing from Muslim Kurds both here in the United States and around the world, who have been very gracious in expressing their warm feelings about the book. I’ve given book talks at the Kurdistan Regional Government’s embassy here in Washington, DC and at a Kurdish youth cultural festival at George Mason University in Virginia. Last June, a Kurdish cultural organization in London flew my father and me out to give a keynote address at the Royal Geographical Society. At talks I’ve given in places like Detroit, Chicago and San Diego, I’ve also met some wonderful Chaldeans and Assyrians. I very much hope that more Christian Aramaic speakers hear about and pick up the book.

Q 3] I really like pages 315 and 316 in your book and what you said to your father. Immigrants [and your father’s case, immigrating to two countries] are brave souls. Do you think Aramaic is a dying language? I do not have contact with any Kurdish Jews now, but I know many of the Chaldeans are teaching it to their children.

A: I fear for the future of Aramaic, and worry that not enough people are teaching it to their children for it to survive more than another generation or two. Sadly, both Jews and Christian speakers (Chaldean and Assyrian) have been driven from the homelands where their language once flourished. It’s a lot harder to keep a native tongue alive in countries where languages like English dominate. It’s even harder as the geographic isolation that once cocooned languages gives way to a highly interconnected global age. There’s a group of talented linguists racing across the globe to document the last surviving dialects of Aramaic, and I’ve written about one of them for the coming February 2013 issue of Smithsonian Magazine.

Q 5] Your book is so interesting, and I learned a lot. I hope one day a movie can be made.

Indeed, I feel the whole book is a gift Sabar wrote for himself, his father, his son, and their legacy. It is also a gift for those who read it.