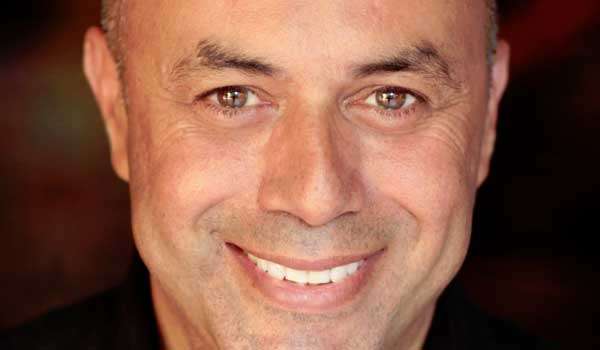 What do actor Herbert Siguenza and the late activist Abbie Hoffman have in common? Having had the honor to meet them both, I can say they are not only warm and charismatic, but they also share idealism as they want to make the world a better place and fight against social injustice. Although not everyone agreed with his point of view, Hoffman did it with his political activism and Siguenza does it with his art.

Stealing Heaven, Siguenza’s latest project for the 20th annual Lipinsky Jewish Arts Festival, is an interpretation of Hoffman’s life as he looks down from heaven, and how he would see the world if he were alive today. It is a timely work in progress as many of this generation don’t even know who Hoffman was. In my opinion, this is sad because Hoffman was such an influential figure for young people of 1967- 1972.  Hoffman committed suicide in 1989, and many speculate that this was caused not only by his manic depression, but also by his disappointment in what he had achieved, and his non-relevance to the next generation. Siguenza hopes to make him relevant again.

Siguenza is in the middle of an 18 month full time artistic residency at the SD Rep where under the guidance of Sam Woodhouse, he is learning how to run a theatrical company. Inspired by the associate artistic director of the SD Rep, Todd Salovey, to do a piece for the Jewish festival, Siguenza dedicated himself to learning and studying all about Hoffman and his ideals. Although some may disagree, Hoffman was patriotic. After Hoffman went underground in 1972 and left the country, he confided to many people that he was very homesick. Siguenza wants to show that patriotism and all the sides Hoffman had. He learned his mannerisms and how Hoffman was a mixture of politics, antics, and theatrics. This is typical of Siguenza who is known for his ability to inhabit the characters he plays as was also the case with his play on the life of Pablo Picasso. In the case of Hoffman, Siguenza becomes a Jewish political activist in heaven making gefilte fish one minute, and remembering his legacy the next. Siguenza wants to relive history and introduce Hoffman to a new generation.

Remembering history and keeping it alive is Siguneza’s specialty as a writer and actor. He started this with the group he co-founded in 1984, Culture Clash. Their plays were political and social satires and commentaries of the 1980’s and 1990’s. Siguenza co-wrote many of the pieces, including Bordertown [ primarily about San Diego and commissioned by the SD Rep], The Mission, SOS, Radio Mambo, Nuyorican Nights, Culture Clash in AmeriCCa, and perhaps their most famous piece,  A Bowl of Beings. Culture Clash hopes to reprise one of their pieces at the SD Rep in 2014 to celebrate their 30th anniversary.

Like Siguenza and Culture Clash, Hoffman was into symbolic theatrics, but for him, the world was his stage and he knew how to use the media. In 1967, while on a tour of the New York Stock Exchange, he threw $300 single dollar bills on the trade floor. His message was that Wall Street would do anything for a buck. He joined anti-war protestors at the Lincoln Memorial. When confronted by soldiers, he claimed they would levitate the Pentagon to exorcise it of its evil spirits. For Hoffman, theatrical antics were the way to deliver the message. Under all that madness was a mind smart enough to get psychology degrees from both Brandeis and UC Berkeley. Siguenza shows Hoffman’s intelligence in his play.

Finally, Siguenza hopes to fine tune his play, honor Hoffman’s legacy, make it relevant for today’s audience, and present it again in 2014. If this comes to fruition, Herbie and Abbie will indeed be a fine match.