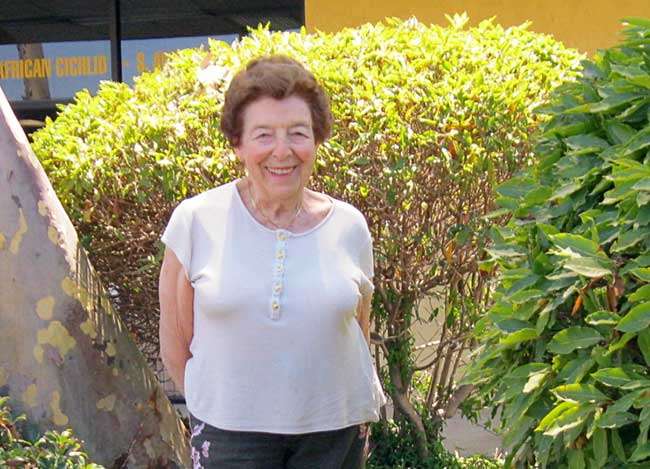 On July 24th, 2013, my good friend Vivian Blackstone celebrated her 85th birthday. A woman in excellent health, she is someone who has lived an unconventional life. Vivian attributes her longevity to good genes, simplicity, eating well, and learning from nature. She also has never been afraid to try or learn new things. Never one to take the traditional path, she has lived a life with an artistic, bohemian, and spiritual bent.

Vivian was born to Jewish parents in New York City in 1928. She started on an artistic path at a young age and studied extensively. She graduated from the School of Industrial Art in NYC with a major in book Illustration in 1946. At the young age of 17, she went to work as an artist in a publishing house. During this time, she also studied illustration for a year at New York University Extension, life drawing at Arts Students League, and painting and poetry at the New School for Social Research. In 1948, Vivian and her family moved to Los Angeles. She continued to study design at the Kann Institute of Art and the concept of language of vision with Saul Bass.

One of her great passions was calligraphy, and the age of 19, she started her own company. This was a bold move for someone her age in the 1940’s. She created custom made stationary for three specialty stores in NYC. The business was a success and many orders poured in. However, after two years of intense, non-stop work, she needed a break and closed her company. She also decided to leave the family home and move into her own place, another thing that was not common in those days, but in many ways, Vivian was a woman ahead of her time.

She became very interested in the new concept of design, and worked as a free lance artist and graphic designer. She opened her own studio and worked on album covers, calligraphy, ads, etc. She was a free spirit who rather than taking the more common route of the time, which was getting married and having children, chose to work and be a part of the bohemian world. She worked hard and made a name for herself. In the late 1950’s, she began to work as an assistant art director at a company that worked with Las Vegas hotels and shows.

In the early 1960’s, she was successful enough that she was able to work for six months on and six months off, and continue a bohemian existence. In the 1940’s and the 1950’s she had been mentored by several talented and successful men in the creative and artistic world, and what she learned from them paid off.

In the 1960’s, probably the most important mentor came into her life, and he was a spiritual one. In April 1962, Vivian was exhausted from working and needed to take a break. Through some friends, she found out about Rancho la Puerta, a restorative and holistic spa, in Tecate, Mexico. She decided to go there and thus, began a new chapter in her life that would continue to lead her down a non-traditional path. A week later, she met Edmond Szekely, also known as “the Professor”. This meeting changed her life. She left everything she had in Los Angeles to begin a spiritual quest under the professor’s guidance. She put her life in the professor’s hands.

Edmond Szekely was a brilliant and unconventional man. He and his wife Deborah founded Rancho La Puerta in 1940. They had two children named Alex and Sarah Livia, and Vivian became a close family friend. The professor was born in Hungary, but left as a young man and traveled extensively around the world. He was a philologist, philosopher, psychologist and a linguist who spoke several languages. He was also an Essene and one of the founders of the Biogenic Society. He took Vivian under his wing.

In July 1962, Vivian moved to Campo and lived in a remote house on 80 acres of land that the professor had bought. He had a vision and wanted Vivian to help him create it with her artistic talents. His plan was to build history stations all around the property, and create a two mile path of all the high points of civilization. Each station had a platform for meditation, so one could contemplate the sculpture, the surrounding nature, and that moment in history. Vivian lived there alone, in the middle of nowhere, but she was not afraid. Every week, the professor stopped by, brought her a box of food, and gave her tasks to complete, such as sculpting heads of Greek and Roman philosophers at the stations.  For Vivian, it was a challenging and lonely existence, but also a spiritual learning process. She lived in silence with daunting tasks to complete. The professor later brought in a trusted Mexican man to work with Vivian and help bring his vision to life. In addition to the above, they put in steam rooms, a swimming pool, and a huge, outdoor chess board. This great feat was accomplished in a year. At the end of that year, Vivian and the professor produced a book about this experience called “Journey through a Thousand Meditations”. The book consisted of different folios for each civilization.

The professor called this labor of love “Mille Meditations” or a “Thousand Meditations”. Guests were invited from Rancho la Puerta and the Golden Door to come and see it. Unfortunately, the concept was not successful or profitable, and the professor sold the land. For all the hard work put in, the vision to open a place to the public for contemplation and history was never realized, and Vivian was disappointed. She was used to working hard and achieving success and the failure of “Mille Meditations” was a lesson in loss.

The next year, the professor bought the house next door to the Szekely family house in San Diego, and Vivian moved there. She continued to study on a spiritual path with the professor, and work with him on books and films. They collaborated together until 1972 when the professor left the country. That chapter in her life came to an end, but she continued with her spiritual studies.

Vivian moved to La Jolla and did freelance work and design. She was hired as the art director at both the Golden Door and Rancho la Puerta. Although the professor was out of the picture, she continued her personal and professional relationship with the Szekely family. She also continued making films and that became her primary way to express her art. She combined her work with her interest in natural healing and spiritual teachings. In 1973, she met Richard Lorrance who became her husband. Together they made the first movie in America on acupuncture. It was called, “Introduction to Acupuncture”, and was produced by Wexler films. Although she married later in life, her marriage lasted for eleven happy years until his death in 1984.

In the 1980’s and early 1990’s, Vivian was still working for the Golden Door, Rancho la Puerta, and other clients. In 1982, she bought a home in Rancho Bernardo to be closer to the Golden Door as she was working on a new cookbook for them, doing all the photography of the healthy, natural recipes. This piqued her interest in gardening, and thus her new passion in life began. She began to put in raised beds and plant trees, so she could cultivate some of her own food. Ever the business woman, she opened a small business that made deliveries of fresh fruits and vegetables to local restaurants. To this day, she continues to garden every day, and finds gardening as another way to express her creativity.

In 1989, while at Rancho la Puerta, Vivian met another creative force in her life, James Hubbell, the noted San Diego architect and artist. He was creating a special project at the ranch. She was very intrigued by the man and his vision. He believed that “Beauty could save the world”. Vivian began to work with him and made a film on the experience at the ranch, called “Kuchumaa Passage”. She and Hubbell became good friends and she continued to collaborate with him on various projects. They worked together for over 10 years and traveled to Russia, Mexico, and China. She enjoyed making films showing Hubbell’s creativity.

In 2010, as she was getting older and looking back on her past, Vivian became inspired to make a film on the professor and his legacy. She thought it was time as “she was one of the last ones walking who knew and loved him, and took to heart what he had to offer”. She has been working on the film ever since, collaborating with Tish Streeten, and it is still a work in progress. In her film, she wants to show the many things the professor advocated that need to be remembered and regenerated. Vivian’s belief is that one needs to know the past in order to create a better future.  Up until recently, she also gave lectures at the ranch while working on the film.  Many ranch guests enjoyed hearing about the history of the ranch from one of the characters who lived it. Vivian believes once the film is finished, it will be her way to honor the professor, Rancho la Puerta, and the memory of the Szekely family.

Helping and doing what she can for others has become second nature for Vivian.  She contributes to various charitable organizations and has also adopted many dogs over the years. She currently lives with two Boston terriers who keep her active and entertained. She may be 85, and enjoy gardening and contemplation, but she is still a bohemian at heart.