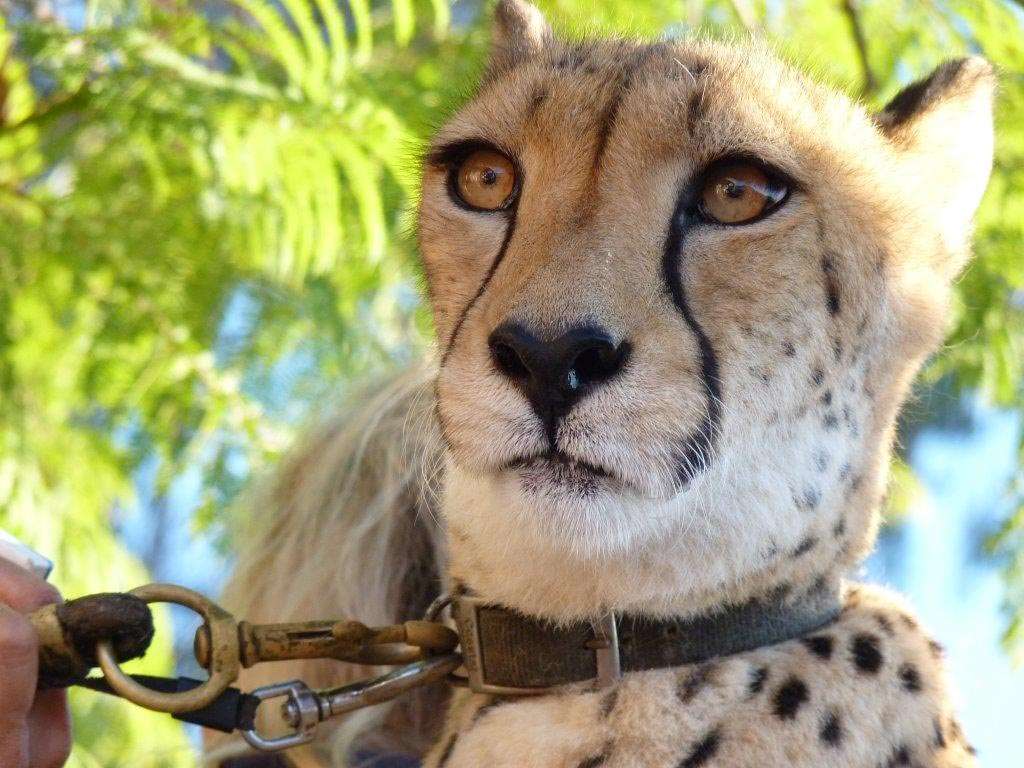 RAMONA, California – Dr. Laurie Marker, a wildlife researcher who is considered one of the world’s top experts on cheetahs, recently visited the home of Roy and Robin Toft as part of her fall 2014 fundraising tour to talk about her work as founder and director of the Cheetah Conservation Fund in Namibia, Africa, and the plight of the cheetah. Dr. Laurie [as she likes to be called] is known as the Jane Goodall of the cheetah world.

For over 40 years she has worked with cheetahs and spread the word of conservation. There are only 10,000 cheetahs left in the wild, and Dr. Marker wants to do something about that as the vast majority of wild cheetahs are outside protected areas and poaching is rampant.

Dr. Marker founded the non-profit Conservation in 1990. Since that time, she has worked tirelessly to create a permanent conservation and research center for cheetahs in the wild while also taking a three part holistic approach to the many factors involved.

First, CCF has been working with the Namibian farmers to protect their livestock by breeding and introducing Anatolian Shepherds and Kangals to effectively guard their herds from predators. Second, CCF is also concerned with the land and habitat as much of Namibia is being invaded by Senegalia, a tough thorny bush that prevents the cheetahs from hunting and the livestock from grazing. Through her conservation program, she has created something called a Bushblok which is fuel made from compressed Senegalia pellets. It is a clean burning fuel that can provide home heating and cooking in regions where electricity is scarce. Third, CCF maintains a cheetah sanctuary to rescue and raise orphaned cheetahs and Bellebenno Game Camp, a 4,000 hectare wildlife holding area for soft releasing cheetahs before re-introducing them into the wild.

All this takes funds and twice a year, Dr. Marker, leaves Namibia to go on tour in the United States. She will be traveling throughout California from September18th until October 11th, giving presentations, signing books, and raising money, as well as making known the plight of the cheetah. On October 16th, she will be at the 13th annual CCF Benefit Gala in Washington, D.C. Check the website for exact dates and locations. www.cheetah.org

Dr. Marker is a remarkable and strong woman who has accomplished a lot in her 60 years. She is considered the world’s foremost expert on cheetah biology. She was born Michigan, but grew up in California. She earned her B.S in biology from Eastern Oregon State University in 1990 and in 2003 a Doctor of Philosophy degree in zoology from the University of Oxford. However, her career in wildlife conservation, particularly cheetahs, began in 1974 at an accredited zoological park called Wildlife Safari in Winston, Oregon. She started as a veterinary assistant, and later became the clinic supervisor. She helped to develop a captive breeding program for cheetahs that came from the wild in Namibia. She became the cheetah curator in 1977. She worked there until 1988 and then took a position at the Smithsonian Institution National Zoological Park in Washington, D.C. as the executive director of the zoo’s New Opportunities in Animal Health Science Center known as the NOAHS Center until she founded the conservation center. She still maintains ties with the NOAHS Center. Like the biblical figure Noah himself, Dr. Laurie envisions herself as a protector of animals and the habitat in Africa, although she says, “There are not more prizes for predicting rain, only prizes for building the Arc!”

Since 1990, she has dedicated herself to the conservation of the cheetah. She thinks she was chosen by the cheetah. She says, “With my first look into their eyes, they captured me and brought me into their life, heart and soul. Then, when I asked people about cheetahs (this was over 40 years ago) zoo people would tell me they knew that they didn’t do well in captivity, they didn’t breed, and they were losing them in the wild. They told me when I found out something about cheetahs to let them know. That opened me up to a lifetime of wonder! Questions asked and answered, and could we save the cheetah…”

It is easy to understand Dr. Laurie’s fascination with cheetahs. Gazing into the soulful, amber eyes of Kumbali, the other guest of honor at the Toft’s home, I was struck by her beauty and grace. Kumbali is a magnificent 13 year ambassador for the San Diego Zoo. Unfortunately, the cheetah is also Africa’s most endangered cat which is why Dr. Laurie has been fighting so hard for their survival. To see how you can help, please go to www.cheetah.org