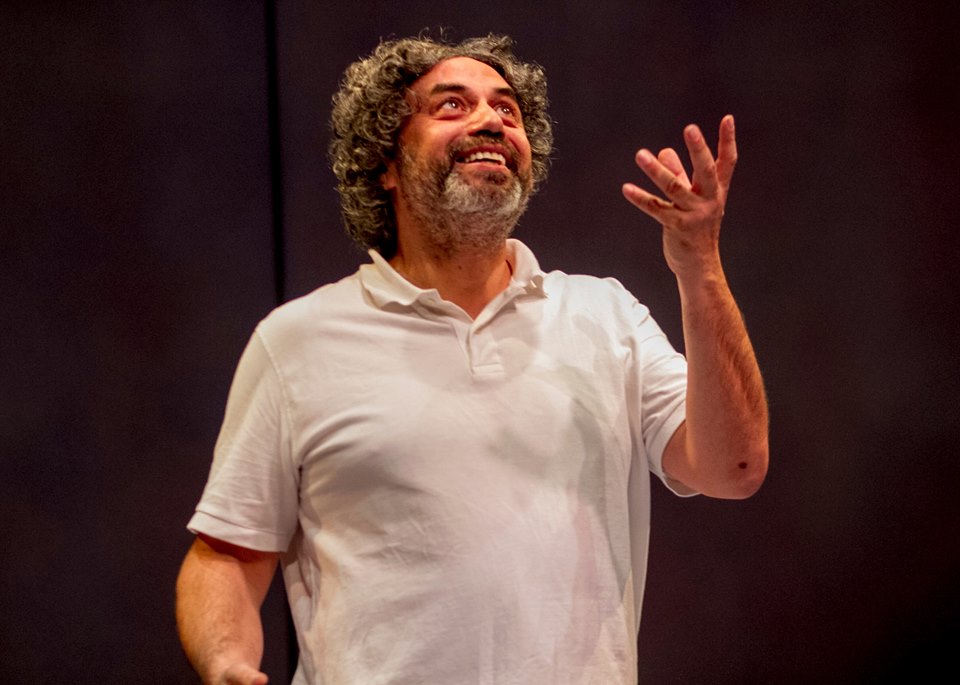 Full Disclosure: I met Abbie Hoffman at a party in Mexico City when he was hiding out there as Barry Freed. He had had a nose job, but I knew who he was as I had been following his antics since 1968 and had read his books. We hit it off immediately and spent the whole evening on a sofa chatting away. He was hysterically funny, smart and very flirtatious. He still had his rebel, radical side, but it had also softened. I never saw him again, but that evening will stay with me forever.

Several years later, I met Jerry Rubin in New York City and what a contrast! He had not only become a capitalist, he was also arrogant and mean.

All this was going through my head when I went to see the play, “Steal Heaven”, starring the talented Herbert Siguenza who also co-directed with Todd Salovey for the San Diego REP.

Siguenza really captures Abbie Hoffman’s Jewsihness, his way of talking, his humor and kindness, his lunacy and his poignancy. There is no doubt that Hoffman was a tortured soul.

However, I think Hoffman would have been proud of this play and how it conveys him. This play honors Hoffman’s influence on the radical movement of the 1960’s, and it also suggests how he could have influenced this generation, something the disillusioned Hoffman never had a chance to do before ending his own life in 1989.

The premise of the play is Hoffman is now in heaven and like the St. Peter for radicals. The time is July 4th, 2017 and one of the last young radicals has been shot and is now in the hospital as she hovers between worlds. The question is will she wake up out of her coma or not? It all depends on if Hoffman deems her worthy to go back and truly be the radical who has enough heart and wisdom to lead the other radicals. To this end, he puts her through a series of tests.

Summer Spiro, who plays Trish the radical, is a force to be reckoned with. At first, I found her too abrasive, but she grows on you and her talent shines through. The girl can move and dance. She can also sing and at the end, she performers a rousing and inspiring rap song.

The music was perfect! Each song, from Cat Steven’s, “Why Do the Children Play”, to Emerson, Lake, and Palmer’s, “From the Beginning”, perfectly captures the feeling each scene is trying to convey.

This is a play that makes you think and question. One moment that particularly resonated with me is when Siguenza says that, “It became un-American to question the government or authority after 9/11.” I could truly see Hoffman saying something like that.

All in all, this is a fitting tribute to Hoffman, the radical baby boomers of the past, and a call to the new generation who has it on their shoulders to change the world for the better.