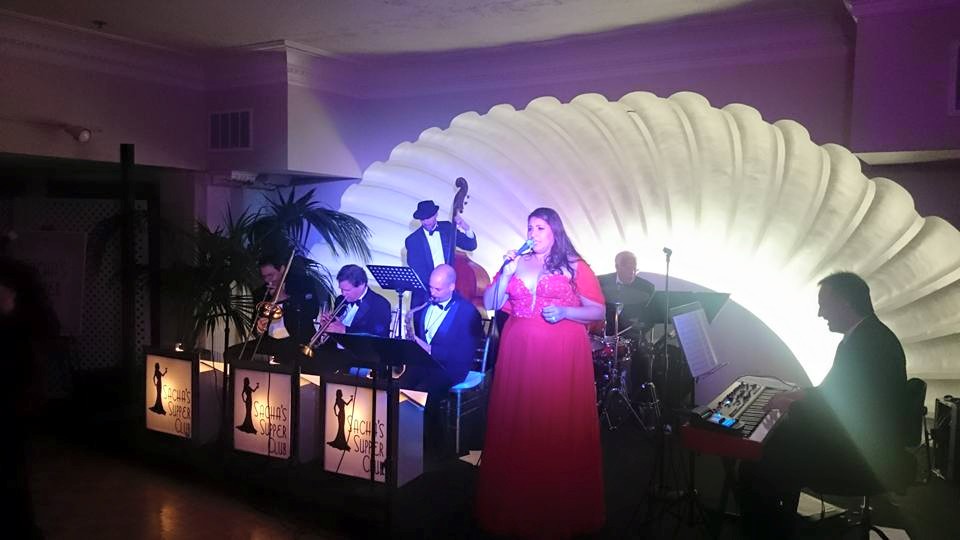 The large shell on stage in the Mississippi room at the Lafayette Hotel was the perfect backdrop for the glamorous singer, Sacha Boutros. That same shell has been there since 1946, the year the hotel opened.

Many celebrities have graced that stage over the years, and Boutros lived up to the legacy. The theme for last Thursday’s supper club was Frank Sinatra and the rat pack. Boutros opened the night with a lively rendition of “The Lady is a Tramp”.

The whole place had the feel of a nightclub from the 1950’s. Most people were very dressed up, the tables were set up around the stage and dance floor, and after Boutros invited everyone to dance, the floor became crowded with couples enjoying themselves.

Boutros was ably accompanied by her band as she sang several memorable Sinatra songs. Her guest artist was the young crooner, Jonathan Karrant, and they sang two duets together. The Hang Ten Hoppers also entertained the crowd as they took over the dance floor to perform several dances from the 1940’s and 1950’s. An added nice touch was two of the male performers went around and asked the single women to dance.

Boutros’s thanked her guest of honor, Father Joe Carroll, a man she has known since her childhood, and who has been a big influence in her life. Boutros herself is to be commended, for she not only gave a wonderful performance, she mostly organized the whole event herself. In between sets, she went around to each table to greet her guests which gave the evening a nice personal touch.

Mark your calendars for the next Sacha’s Supper Club which will be on Thursday, August 13th. The theme for that evening will be “Havana after Dark”. This time the Mississippi room will be transformed into a Havana nightclub of the 1950’s.  Boutros will sing mostly in Spanish with a few songs in English.

August is also her birthday month and she plans on donating a portion of the proceeds to El Hospital Infantil de las Californias in Tijuana. The concert will also offer a sneak peek at some of the songs which will be on her upcoming CD, also named, “Havana After Dark”.

Mississippi Room at the Lafayette Hotel.