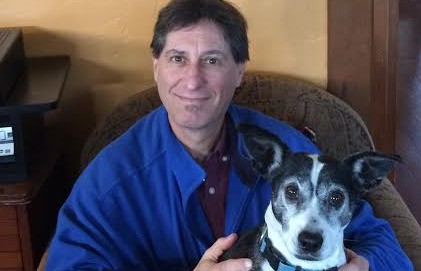 Yale Strom may be a multitalented man and a well known musician both locally and internationally, but he is also refreshingly down to earth and modest, answering my questions at his rustic, comfortable home in Mission Hills with his loving dog, Olive, snuggled on his lap.

Where to begin? Strom is a musician, composer, writer, historian, photographer, and filmmaker. He has also been an ‘artist in residence’ teacher at SDSU for the last ten years, a position created for him. He has 15 CD’s, 14 books, and 9 films under his belt.

He was born in Detroit 55 years ago to a strongly socialist family. Although his parents were not musicians, music was always present in the house growing up. The family moved to San Diego when Yale was child, and he graduated from SDSU with a BA in both American Studies, and in Furniture Design. He went on to get his Masters from Colombia University in Yiddish Studies with an emphasis on Klezmer music. Thus, his talent in many areas started young.

His interest in Klezmer music was social, historical, and musicological. This led to him to a fascination with Roma or Gypsy music, the connection between Eastern European Jews and the Roma, and one of many memorable trips to Romania, Moldova and other countries in Eastern Europe. One connection they had is that both minorities had been marginalized, and many of the Roma moved into former Jewish areas. They also had stereotypes about each other, but many ultimately bonded through their music, and sometimes played in each other’s bands. Another unfortunate fact is that they were the only two ethnic groups targeted in the Holocaust.

As Strom mused, “The DNA of Jewish music comes from the Middle East or the ancient scales of the “Ites”, and Roma music also has similar ties.

Today, Strom has several Roma friends and a Roma accordionist in his Klezmer band, Hot Pstromi. He actually has a San Diego version of Hot Pstromi and a New York City version. Strom proudly states that there are very talented musicians in both bands, and some play both coasts. However, the two constants are Strom and the lead singer, his wife and muse, Elizabeth Schwartz. They have an 18 year old daughter who studies at UCSD.

Strom made me smile when he told me that his father’s students used to call him, “Mr. Pastrami”, an inspiration for the band’s name. David Strom is a retired professor from SDSU, and one of the founding members of Chabad in San Diego. Father and son are very close.

Strom’s interest in music, history and culture led him to receive a grant from San Diego [Creative Catalyst Grant] to write musical pieces, incorporating the music of recently arrived immigrants. So far, he has written two pieces, incorporating Somali and Chaldean music to a more western form.

This spring there will be upcoming concerts. On March 13th, Hot Pstromi will perform at Torrey Pines Christian Church. On April 12th, there will be a concert at SDSU to celebrate the release of Strom’s latest CD called, “City of the Future”, with traditional Yiddish Russian songs. As an ESL teacher, the most interesting one for me will be the concert on April 17th at Temple Solel in Encinitas. The Hausmann quartet will perform Strom’s ‘Somalian Quartet’, and Hot Pstromi will present, ‘The Chaldean Jazz Quintet’.

Other exciting projects he has coming up are a documentary on the founder of the Socialist Party in America, Eugene Victor Debs. He is also working on an upcoming musical play on the life of painter Marc Chagall. This play is a collaboration between Strom, his wife, and choreographer, John Malashock. For Strom, Chagall is the man who inspired the play “Fiddler on the Roof” because of his painting. Strom has the blessing of Chagall’s, granddaughter, Bella.

Strom is a master juggler as he can work on several projects at once, doing them all meticulously, as well as his teaching. Despite his success as a musician, composer, writer, filmmaker, and photographer, he keeps his feet on the ground, never resting on his laurels. There is always the next exciting project!