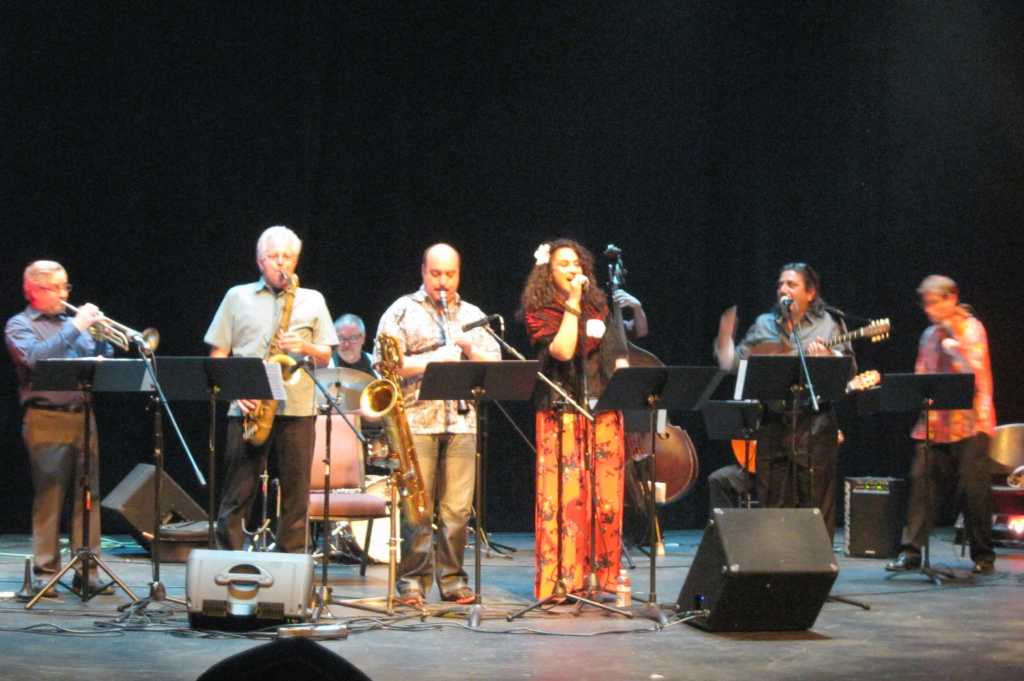 The 24th Annual Lipinsky Family San Diego Jewish Arts festival, directed and produced by Todd Salovey, has been a multicultural learning experience for me.

First was the exhibit of Boris Malkin [1908-1972], a painter, graphic artist, and book illustrator from Belarus. His work is dark, compelling, and poignant, perhaps reflecting the attitude of the Soviet Union government toward its Jewish population, especially in that era of anti-Semitism. His work is that of a sensitive, but haunted soul. I also spoke with his granddaughter, Mariya, who is very proud and protective of her talented grandfather’s legacy. His work was shown at the Lyceum Lower Gallery.

Next was the 16th Annual Klezmer Summit with Yale Strom and Hot Pstromi. They presented, “Tower of Babel- A Klezmer, Roma, Balkan Brass Party. The band included many gifted musicians, including singer, Elizabeth Schwartz, Strom’s wife, Tripp Sprague on tenor sax, and Fred Benedetti on guitar. The music reflected how military brass music in the Ottoman Empire was influenced by the music of the Jews [klezmer] and Roma [taraf]. The last song, however, was a rousing rendition of Hava Nagila.

On a personal note, I have had a fascination with klezmer music for many years. Thus, the highlight of the festival for me was “The Wandering Feast”, based on Yale Strom’s year long journey in 1981 backpacking around Eastern Europe, and his search for old klezmer music and Jewish life left behind the Iron Curtain.

That journey turned into one of self-discovery into his own Yiddish heritage, and finding out about the strong connection between klezmer and Roma music. This was a touching presentation with the charismatic, Max Singer, reading as the young Yale while Strom played violin in the background.

Again on display was the anti-Semitism that the people behind the Iron Curtain endured, especially during and after World War II. I saw many in the audience dabbing tears from their eyes. They were clearly moved. I can’t wait for this to be turned into a full blown production with its insights and music!

Finally, on July 6th, the film, “Challah Rising in the Desert” The Jews of New Mexico will be shown. Directed by Isaac Artenstein [Tijuana Jews, A Day without a Mexican], this documentary is part of a four part series on the Jews of the Southwest, including San Diego. The braided challah bread represents the five waves of Jewish Settlers in New Mexico, starting with the “conversos” escaping the Spanish inquisition 400 years ago, the German pioneers of the Santa Fe trails, the scientists at Los Alamos in the 1940’s, the counterculture hippies of the 1960’s, and the Jews of today. Of particular interest to me are the “conversos” or the secret Jews of New Mexico and their descendants. Artenstein has the knack for keen observation, so this film and the three documentaries should be educational and insightful.