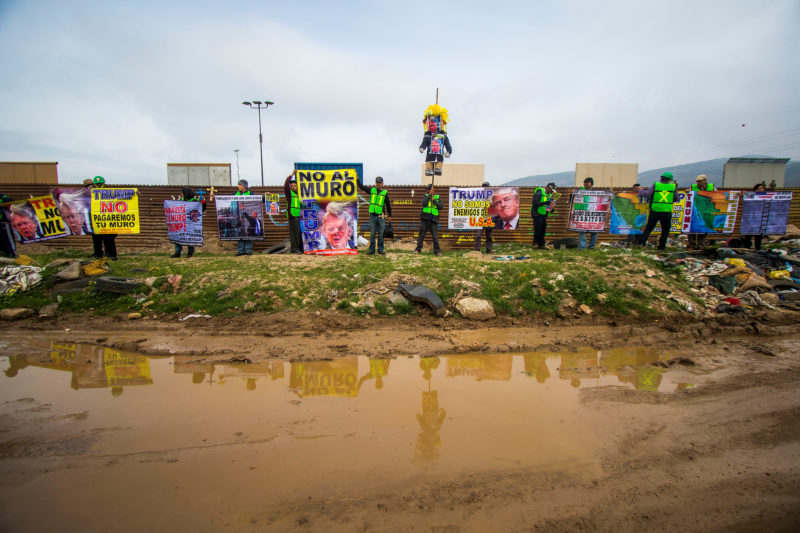 Fifty of those arrested were convicted criminals and seven others had illegally re-entered the U.S. after removal, according to ICE. All but seven of the arrests took place in San Diego County.

Border Report
Some of the arrests — though ICE could not specify how many — were considered “collateral,” meaning they were not targets of the operation but happened to be at a location where officers were looking for a target.

A San Diego ICE official told the Union-Tribune that large-scale operations like this aren’t new and have been done under other administrations, but they haven’t conducted one this size in San Diego “for some time.”

What does seem to be changing, though, is the number of non-criminal immigration-related offenses. Only 43 percent of the arrests in this operation were people with criminal records and, as another Union-Tribune story pointed out, more people with no criminal history have been arrested by ICE in San Diego than anywhere else in the country.

In the first quarter of fiscal year 2018, the majority of arrests — about 72 percent — were “noncriminals,” revealing how enforcement is changing. Between October and December of 2017, ICE officers in San Diego arrested 1,622 people without criminal records, and 637 people with criminal records.

“ICE arrests of non-criminals in the San Diego/Imperial counties reflect trends involving illegal immigration activity at the local borders, apprehensions made during routine fugitive operations and individuals encountered at the local jails,” an ICE spokeswoman told the Union-Tribune.

In its press release, ICE reminded the public that California’s so-called sanctuary laws — the subject of a recent federal lawsuit — are leading to these types of operations: “While the vast majorities of cities in America do cooperate with ICE, state laws in California force ICE to focus additional resources to conduct at-large arrest in the community, putting officers, the general public and aliens at greater risk and increase the incidents of collateral arrests.”

• The California Values Act, or Senate Bill 54, is causing Border Patrol to turn over fewer unauthorized immigrants who have committed local crimes to local police and disrupting collaboration between law enforcement in other ways, according to the San Diego Border Patrol Chief Patrol Agent.

Some parts of the statement made me wonder whether the feud between the state and federal government is really about the law and its impact on immigration enforcement. We’ve pointed out many times that California, even with the passage of SB 54, is no sanctuary for unauthorized immigrants.

• KQED has a fascinating story of how California went from Proposition 187 in the 1990s — which denied undocumented immigrants access to publicly funded services — to a so-called sanctuary today.

San Diego’s Human Trafficking Problem Requires Binational Work
San Diego was identified as one of the Federal Bureau of Investigations highest sex trafficking areas in the country back in 2003 — and the problem hasn’t gone away. The city’s location, adjacent to Tijuana and on the busiest border crossing in the Western hemisphere, plays a big role in why we see so much human trafficking in the region.

That’s why nonprofits, government prosecutors and survivors of human trafficking from both Baja California and San Diego gathered in Chula Vista on Friday to strengthen their collaboration in combating human trafficking.

“It’s about the network,” said District Attorney Summer Stephan. “We can only beat it by working together and leaving no border where they can run to.”

The binational conference was organized by International Network of Hearts, a nonprofit that helps victims of human trafficking, and the San Diego County District Attorney’s office.

Just the night before the conference, dozens of men were taken into custody during a sex trafficking sting in the Mission Valley area.

Since that 2015 study, some progress has been made in addressing human trafficking in the region, but prosecuting the crimes remains a challenge.

Eric Roscoe, an assistant U.S. Attorney in the Southern District of California, revealed during one of the panel sessions that his most successful human trafficking case took three years to prosecute and, though two victims had been assaulted on the same night by the same perpetrator, the case resulted in an acquittal — exemplifying how difficult these cases can be to prosecute. Roscoe said that the victims gained some relief in being able to speak out.

Working across the border, officials in Baja California focus their efforts on education and prevention, trying to raise general awareness of human trafficking and associated crimes and improving their efforts to identify and help victims.

“Slavery continues to this day,” said Hector Orozco, a prosecutor of trafficking crimes for the Baja California Attorney General’s office, in Spanish. “The worst thing is that now they are invisible slaves, because before we saw people in shackles and we knew they were slaves.”

Trump Visits California
President Donald Trump visited the border wall prototypes in Otay Mesa last Tuesday. If you haven’t already read up on the visit, here’s a play-by-play from KPBS and the Associated Press.

On the Mexican side, dozens of Mexican police guarded the barrier for the president’s visit. Many in Tijuana told the Arizona Republic that this felt wrong, considering the surge in homicides in Tijuana.

One Uber driver said, “For us, it seems totally wrong because, right now, Tijuana has a very strong problem with insecurity, and those resources could have been better spent on the city itself, and not to look after someone that, sincerely, doesn’t care about us.”

Politico talked to several people about what they wished Trump had focused on during his visit to California.

San Diego Mayor Kevin Faulconer and Denise Moreno Ducheny, a former Democratic state senator, said they were disappointed that the president didn’t visit some of the region’s impressive border infrastructure, like the Otay Cross-Border Express, which connects San Diego with the Tijuana airport, or see how our region embraces cross-border trade, job development and manufacturing.

• Speaking of cross-border sewage and pollution, state Sen. Ben Hueso from San Diego called on Gov. Jerry Brown’s administration to take legal action against the federal government to help bring more attention and resources to the problem. Imperial beach, Chula Vista and the Port of San Diego recently sued the U.S. International Boundaries and Water Commission over the issue. (Union-Tribune)