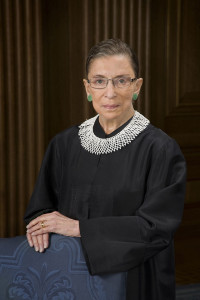 RBG, the documentary about Ruth Bader Ginsburg, directed and produced by Betsy West and Julie Cohen exposes a quiet, ladylike, and very persistent revolutionary.  She was a strong advocate for gender equality and women’s rights, meaning she would represent men who were discriminated against as well as women.  Besides being a professor at Rutgers School of law and Columbia University, she became a volunteer lawyer for the American Civil Liberties Union (ACLU) and in 1970 co founded the Women’s Rights Project at the ACLU.

Ruth Bader Ginsberg, a Russian Jew, was also a wife and mother before she even entered law school.  Her husband Marty Ginsberg was a successful tax lawyer.  However, first and foremost, he always was an advocate for his wife: encouraging, supporting and feeding his wife and family.  Apparently Justice Ginsberg is a really bad cook.  However, Marty was really good at cooking.  One of the reasons that this woman is able to accomplish so much is because she is able to survive on very little sleep.

This documentary is an interesting and informative exploration of the “Rights” movement in the United States.  Justice Ginsberg describes the 1950’s, when she entered college, as a bad time for rights.  For example there was the “red” scare, McCarthyism, and many legal barriers to equality for women and people of color in general.  She said that she became a lawyer to fight for people’s rights.  When Jimmy Carter became president he looked at the federal judicial bench and saw no women and no men of color.  He decided to work to change that.  In 1980 he appointed Ginsberg to the U.S. Court of Appeals for the District of Columbia.  She served there until 1993 when President Clinton nominated her to be appointed to the Supreme Court.  Whether as part of the majority or in dissent, she has continued to advocate for equality for everyone.

In the 2016 Presidential Election she got into trouble for speaking against then candidate Donald Trump.  She was criticized and apologized for making inappropriate statements as a Supreme Court Justice.  Nevertheless, some people wondered if at 85 she was getting too old for the job.  Was she thinking about retiring?  Her response, “I will do this job as long as I can do it at full steam.”

It appears that Justice Ginsberg has lived her whole life at full steam, and this documentary does a very good job reminding us of all that she has accomplished.

‘Mountain’ bespeaks our love of summits