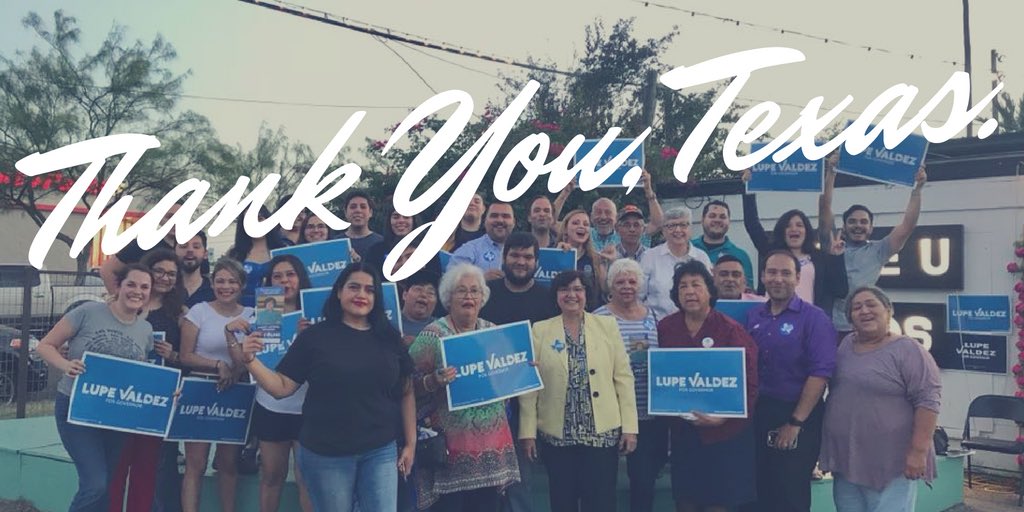 Valdez’s victory in a runoff ― while somewhat expected, after she ran well ahead of Democratic opponent Andrew White in the nine-candidate primary in March ― broke historic barriers as she becomes the first Latina and first openly gay person nominated for governor by a major party in the state.

In Valdez, Texas Democrats chose a lesbian woman of color running on a progressive platform over White, a straight, white Houston businessman and son of a former governor, running as a centrist. 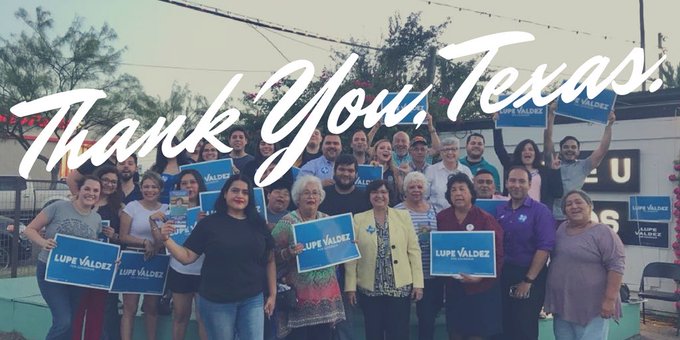 Thank you, Texas! Tonight is for you!

Valdez, 70, faces an uphill battle against Abbott in November. The incumbent, who is favored to win, has amassed more than $40 million for his re-election campaign, while Valdez in recent months raised only about $200,000. Abbott beat his 2014 opponent, then-state Sen. Wendy Davis, in a landslide, despite strong national support behind the pink-sneakered, pro-choice candidate.

The solidly red state has also not elected a Democrat to statewide office since 1994. And it’s been since 1990 that a Democrat won the governor’s office.

But Valdez, the eighth child born to Mexican-American migrant farmworkers, is used to overcoming long odds. When she became sheriff in 2004, she was the nation’s only Latina sheriff, and among the state’s first openly gay sheriffs.

For Latino Texans, her win would be a triumph of representation in a state where they make up nearly 40 percent of the population.

“It’s long overdue to have Latinas sit in these halls of power,” native Texan Amy Hinojosa, president of national Latina organization MANA, told HuffPost last month. “When you think of the generations of girls to come, to see a Latina, a queer woman in the state house, that just represents such power for young women to be able to aspire to that.”

A Valdez victory in November would also break barriers for the LGBTQ community, as she would become the nation’s first lesbian governor (Oregon Gov. Kate Brown, who took office in 2015, identifies as bisexual).

“You want to see my scars?” Valdez joked to HuffPost in March, speaking of the discrimination she had faced as a queer woman in her career in Texas law enforcement. “The first four or five years [as sheriff] were extremely difficult. I got hate email and faxes. I got pushback from a lot of the good old boys.”

Analysts say that for Valdez to win in November, it will be essential for her to increase historically low turnout among Latino voters, a demographic Democrats have long sought to galvanize in the state. Latino Texans tend to vote Democrat ― though in 2014, Abbott got 44 percent of the Latino vote.

On the key issue of immigration in the border state, where Trump wants to build part of his border wall, Valdez has made a name as a fierce opponent to Abbott.

The governor signed the notoriously anti-immigrant Senate Bill 4 into law last year, which banned “sanctuary” policies that limit local cooperation with federal deportation efforts. In 2015, Valdez clashed with Abbott when she said Dallas County law enforcement officials would only cooperate with federal Immigration and Customs Enforcement (ICE) agents on a case-by-case basis.

“People who rape, murder and abuse, commit violent crimes, I have no trouble saying no to ― and I often joke I wish I could say that to a lot of Americans,” Valdez told HuffPost in March.

“But people who came here for a better life, get picked up for a broken taillight or speeding, who make as many mistakes as the rest of us Americans make… which one of us who has no sin can cast the first stone?” she continued. “We should just leave them alone.”

In the lead-up to the runoff, Valdez had faced criticism from local Latinx activists who questioned her record on immigration as sheriff, saying her department often cooperated with ICE in handing over undocumented detainees. Valdez’s team told HuffPost in April that as a local official, she faced challenges in pushing back against the anti-immigrant efforts at the federal and state levels.

Another frequent critique of Valdez has been that she has appeared unprepared to address state-level policy issues ― a concern raised in local newspaper endorsements that went to White.

He said that Valdez, during a recent debate with White, couldn’t answer simple questions about state budgets, and would “fall back on her relatively inspirational personal narrative ― and that’s all she has going for her.”

Responding to such critiques and the endorsements White garnered, Valdez’s team told HuffPost last month that “she can’t win them all,” and she was “used to people telling her she can’t do it or it can’t be done. Time and time again, she has been underestimated and proved them wrong.”

Valdez’s victory will likely intensify speculation as to whether Texas could become a politically competitive state for Democrats.

In another Texas race that will be closely watched, Rep. Beto O’Rourke, also a Democrat, seeks to unseat Republican Sen. Ted Cruz.

“Maybe not this year,” Brittany Perry, an assistant professor at Texas A&M University who specializes in U.S. politics and Latino representation, told HuffPost last month of Valdez’s chances of beating Abbott. “Maybe down the road. Maybe we’re paving the way for future Latino candidates in Texas.”