Inicio Idiomas The Centro Cultural and Kumeyaay Museum in Tecate 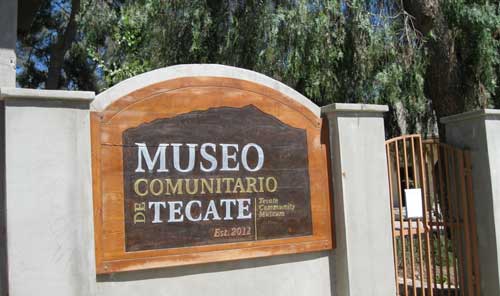 There are only 70 to 80 people left in Baja California who speak Kumeyaay, according to Michael Wilken Robertson, an anthropologist who also specializes in ethno-botany. When Wilken-Robertson first started his journey studying the indigenous people of Baja California, he was told there were no indigenous cultures there! He believed something had to be done to preserve these ancient cultures and traditions before they were lost, especially those of the Kumeyaay [Kumiai] people. The Kumiai are the indigenous people on both sides of the border, starting from Carlsbad on the United States side, down to the Santo Tomas Valley in Baja California, Mexico. The Museo Communitario de Tecate [Tecate Community Museum] and the Kumiai wing is a good first step towards documenting the life and history of these people. It is part of the Centro Cultural [Cultural Center] in Tecate, Baja California.

Tecate is a border town just east of Tijuana, known for the brewery that makes Tecate beer, and Rancho La Puerta, a world famous spa. Driving on HW 94, it takes about 45 minutes to get there from San Diego. Tecate retains much of its old world charm. The Centro Cultural, which encompasses two square blocks, started out as a chicken ranch on the outskirts of town, but is now considered to be pretty much part of the downtown area. The Community Museum is one facility of many in the Centro Cultural, including an art museum where they have different exhibits. Near the Kumiai structure, there is a building which houses photographs that document Tecate’s history. All of this is sponsored and managed by the Corredor Historico Carem, a non-profit organization that is dedicated to identifying, preserving, and presenting to the public the historical and cultural heritage of Baja California.

The Kumiai building is the jewel of the place. It officially opened in June 2011. The shape of the building is very interesting, as it was designed by James Hubbell to invoke indigenous themes. However, it is clear that Wilken Robertson is the heart and soul of the place. One could see the passion he felt while he was giving a tour. On the inside, there are beautiful stain glass windows and paintings on the wall that represent the history and nomadic life of the Kumiai who spent their time moving between the desert, mountain and coastal areas during their seasonal migrations. Other exhibits depict the way they lived. There are baskets, carrying devices, mortars, pestles, and other tools that had to be both functional and portable. There are also interactive, bilingual electronic displays.

A good metaphor for the museum and what it represents is an oak tree that is planted in the middle of the complex. It started out as a stick with a few leaves. It almost died. They gave it water and good soil and it survived and thrived. The oak tree is a sacred tree for the Kumiai, and it serves them in many ways. Like the tree, the museum can also serve, telling the story of the indigenous people, helping to overcome discrimination, and finding a way to encourage interest in younger generations to spark a new appreciation for their culture.

Along with the Kumiai building, the grounds include a traditional, indigenous dwelling, water well, and a garden of native plants, each with its own use. There is also a gift store with traditional indigenous arts. Emilia, a Kumiai woman who is one of the last remaining 70-80 speakers, manages the gift shop. The day I was there, her six year old granddaughter, Irene, was accompanying her. I asked Emilia if Irene could speak Kumiai, and she told me the girl knew only a few phrases, but that she was teaching her. Let’s hope she learns, and teaches her children, so those 70-80- speakers are not the last!!