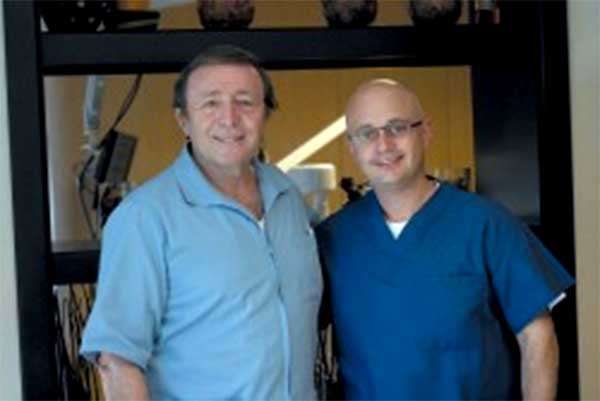 Why would a successful dentist leave a thriving practice in Mexico to start over in San Diego? Dr. Abraham Romanowsky did just that. Never one to back down from a challenge, he has sought to take the best path all of his life, starting with his education, the woman he married, and finally moving to the city he now calls home.

Romanowsky was born in Mexico City to Polish parents. His father was a business man who spoke six languages. He left Poland in 1930 to join an aunt and uncle who were successful in Mexico. His mother arrived in Mexico at the age of six. Both parents spoke Yiddish at home to each other and their children. Romanowsky was raised in a home that valued Jewish traditions and education. He was the oldest child followed by two brothers and a sister. Like Romanowsky, his youngest brother, Jaime, is also a dentist who remained in Mexico. His brother, Bernardo, studied to be an engineer and later became a successful businessman in San Diego. His sister, Elena, is an artist who also lives in San Diego.

Like many Jewish children in Mexico, Romanowsky studied at El Colegio Israelita until the 9th grade. He did high school at La Prepa Nacional Numero 1, a public high school in Mexico. He went on to the Universidad National Autonoma de Mexico [UNAM] where he graduated as a dentist in 1967. It was here that he first encountered anti-Semitism from a fellow classmate. Romanowsky discovered this classmate had stolen one of his text books. When confronted, he called him a “dirty Jew”. Fortunately, several other students rallied around him and he got the book back after it had been missing for 4 months. One might say that that student was jealous as the “dirty Jew” was an excellent student who graduated with top honors.

His first big challenge came next when he went on to graduate school at Boston University. Not completely fluent in English, he still persevered and finally graduated with a degree in Prosthetics Dentistry. He then went on to do one year at Harvard, studying Dental Public Health. Today, he speaks English fluently.

His second challenge came with the woman he married. The Jewish community in Mexico tends to be very conservative and some eyebrows were raised when he married an American Jewish girl from Detroit, Michigan rather than marrying a Mexican Jewish girl.  He met Bonnie when he was a teenager at a summer camp. They got married in 1967 and she went to Boston with him. In 1970, when they moved back to Mexico, there was a period of adjustment, but their love and commitment prevailed, and he and Bonnie have been married for 46 years.

They lived in Mexico from 1970 to 1982. He opened up a practice with another dentist, and they soon had many patients. He also taught classes at the UNITEC, a technical university in Mexico. He and his wife had a son named Jonathan and a daughter named Diana, and their children were the impetus that made him think about moving. He felt he could offer his children a better education and life in the United States. Since his wife was American, it would be an easy adjustment for her, and so the third challenge began.

In 1975, his brother Bernardo had moved to San Diego and made a good life for himself. His sister, Elena, had come in 1978. In September 1982, the big devaluation happened in Mexico and many people lost a lot of money. The situation in Mexico was becoming tense. That clinched the deal for Romanowsky and his wife, so at the end of September 1982, they began to make all the preparations and moved to San Diego.

At first, it was not easy as he tried to set up a practice across the border. Finally, while in Tijuana, he met some other dentists and doctors, and they decided to open up offices in the Allen Lloyd Building which had just been built close to the border. There were 2 dentists and 14 physicians, and they rented an entire floor. He worked in that office from 1984 to 1990.  While working there, Romanowsky was still flying back to Mexico City to finish up all his cases. That took him 8 months. Fortunately, his younger brother then took over the practice.

His wife and children adapted quickly to their new life, but it was harder for Romanowsky. He had his practice in Tijuana, but he had to start almost from scratch in San Diego. He went from being a successful dentist and professor in Mexico to preparing to take the California Dental Boards at Loma Linda University. He had to pass the five parts of the boards. He finally passed in 1987 and got his DDS degree. All the hard work paid off, and a new door opened.

While at Loma Linda, he was mentored by a dentist who needed someone to rent a space in his office in Vista, and Romanowsky agreed. Thus, he began a freeway flyer existence, commuting between his home and his offices in Tijuana and Vista. He worked six days a week, including Saturdays. In 1989, a dentist he knew who had a practice in La Jolla, died suddenly in a tragic accident. The widow then sold the practice to Romanowsky. It took two months to set up, so he was commuting between Tijuana, Vista, and La Jolla! Finally, in 1990, he began working full time at the office in La Jolla. His office was in an old building in the Wind and Sea area. In 2004, the building was sold and the new owners were not very receptive to bringing the building up to modern standards. He started to look for another place. For fifteen years, he had been working with a younger, Colombian dentist, Jaime Breziner. Breziner had graduated from Loma Linda University. They looked for several months, and found an office in a building near downtown La Jolla. Romanowsky liked it because it reminded him of his building in Mexico. They rented part of a floor and for the next 11 months set about creating a new dental office. Breziner was very instrumental in helping to design it, and they became full partners. They have been very successful with patients from all over the world.

At 68, Romanowsky is still working four days a week as he loves his work. Being active is very important to him, and he plays tennis, runs, bikes, and works out with a trainer one day a week.  He has many hobbies, but his favorite one is singing in a choir called the San Diego Jewish Men’s Choir or Kol Hakavod. They sing in English, Hebrew, Yiddish, and Ladino. They have a new CD coming out in November. Part of the proceeds will be donated to various senior homes.

It is also important for him to give back. He is part of the UCSD Mentorship Program and works in the biology department. He works with students who want to become dentists. They go to his office to shadow him for three weeks at a time. He also works with the San Diego Dental Association. Every February, they hold clinics in the South Bay, giving free dental services to lower income children whose parents cannot afford dental care.

Finally, Abraham Romanowsky is a family man, and he takes great pride in the accomplishments of his children and grandchildren. He is truly an immigrant success story who worked hard and can now enjoy the fruits of his labor. He plans on staying in San Diego even after he retires. He loves the life he has made for himself, and feels he made the right decision when he left Mexico to move here.