Inicio Idiomas Embracing the Reawakening of the New Americans Museum 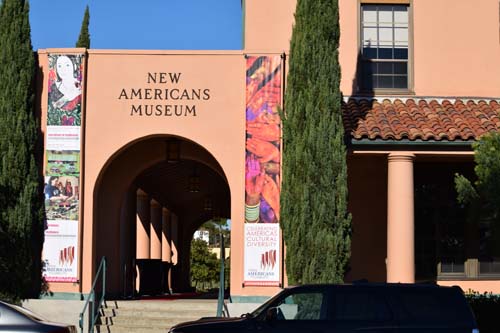 The United States is a kaleidoscope of cultures from many lands. There is a museum in Liberty Station that embraces this kaleidoscope. January 16th, 2015 was the official opening of the New Americans Museum. This is the second reincarnation of a museum that honors our country’s immigrants through both educational and cultural exhibits and programs. It is a place to discuss and discover where so many Americans come from. For me, this day consisted of two exciting events.

In the morning, the first event was the press conference, my first as a writer. We were greeted by the formidable Deborah Szekely, 92, the heart and soul of the museum. The child of Jewish immigrants herself, she is a well known philanthropist, health enthusiast, and founder of the renowned spa, Rancho la Puerta.

It was her vision to create a museum where the contributions of America’s immigrants could be celebrated. A place where the children of immigrants could find out what their parents had gone through to get here. These children are especially important to Szekely, and to this end, the museum also plans on having naturalization ceremonies for children under 18 who receive their citizenship.

The executive director of the museum is the charismatic Linda Caballero-Sotelo, an immigrant herself, who plans on working closely with both artists and educators to create a vibrant space where immigrant stories can be told. This will be a place that will appeal to all ages as a there will be different forms of creative expression, including visual, film, festivals, music and even food. There will also be written and oral narratives. The vision is a museum that will be a civically engaged, active institution

Right now, there are two exhibits. The first one is by the LA based artist, Carolyn Castano, a child of Colombian immigrants. Her colorful exhibit, called Mujeres Que Crean/Women Who Create, honors the life stories and resilience of a group of Colombian women who were forced to leave their homes due to social and political upheavals. They relocated to Medellin where Castanos worked with them. She displays their stories and her artistic vision using a variety of media.

The second exhibit is Narratives of Resilience: Reimagining Homeland. This retrospective by Patrick Breslin showcases a series of weavings by another resilient group of Colombian women in San Isidro, a “barrio” outside of Bogota. These tapestries were collected by Deborah Szekely’s during her Inter-American Foundation years, 1984-1991.

These exhibits run from January 16 to March 21, 2015. There will be four exhibits this year. The next one, Becoming All American: Celebrating Immigrants in Major League Baseball begins April 10 and runs to July 4.

The second exciting event was in the afternoon at the opening reception. At this event, I was both writer and ESL teacher as I proudly watched the group of ESL students from Mid-City Center that fellow teachers and I had recruited. They were there as volunteers to greet the guests, and represent the thriving immigrant population we have in San Diego. Countries represented included Afghanistan, Burma/Myanmar, Cambodia, Guatemala, Haiti, Mexico, and Russia, to name a few.

Many dignitaries were also there to honor the reawakening of the museum, such as congresswoman, Susan Davis, and Latina mayor of Chula Vista, Mary Salas. January 16 was named New Americans Museum Day. The opening was fitting as there was a very large and diverse group of people who mingled, eating international bites, admiring the two exhibits and finally dancing to the music provided by a live Colombian band.

The New Americans Museum is a welcome voice in San Diego where there is such a varied immigrant population. I look forward to students participating in the Family Histories Essay Competitions where students from K-12, adult, and community college classes will write about either their personal or their families’ immigration to the United States and what it means to be a new American.

This will be a place where people of all backgrounds can feel proud to be American, and honor all the contributions made by so many that have begun a new life. It is also a place where their children can realize the struggles their parents went through, so the next generation could have a better life. Finally, it is a place where all ages can discover and learn about the melting pot that is this country.