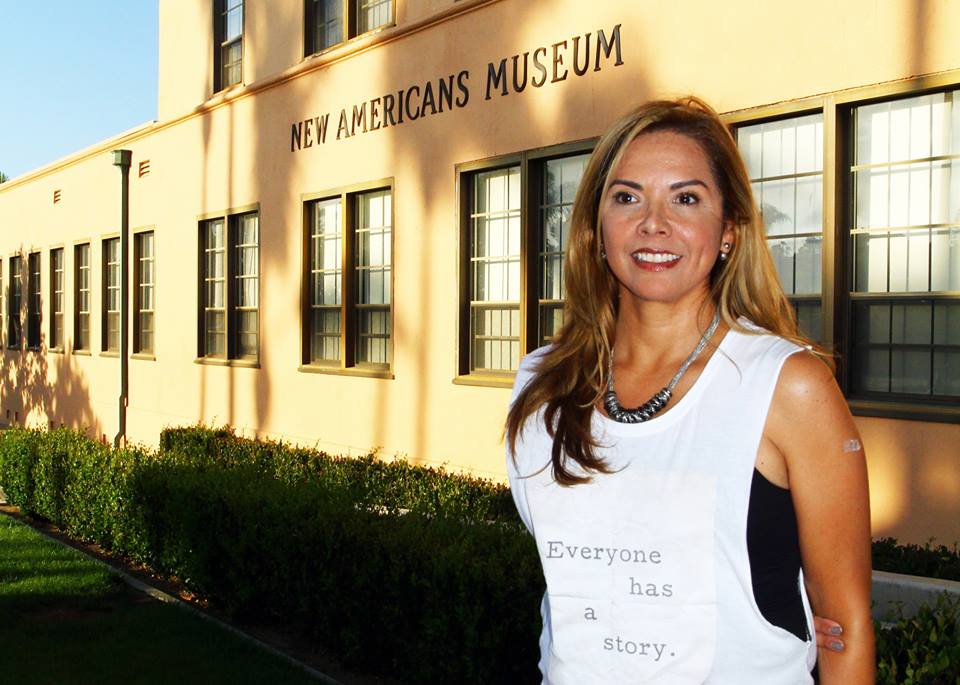 Linda Caballero-Sotelo carries two passports, Mexican, and Spanish, as well as an American green card. She will become an American citizen in 2016. As the executive director of the New Americans Museum, her own background makes her well suited for the job.

The United States is a land of immigrants, and The New Americans Museum is a place that is dedicated to honoring those who have arrived in the United States post WWII. Linda herself is an immigrant and the granddaughter of immigrants. Her grandparents arrived in Coahuila, Mexico from Barcelona, Spain, so they were both Spanish and Catalan. Linda was born In Tijuana, and later settled in San Diego.

How do you embrace recently arrived immigrants while at the same time celebrate those who came before? This is something Linda is passionate about, and she has never backed down from a challenge, especially in light of the anti-immigration back lash this country is now experiencing. She wants to find ways to create a civilized dialogue, and hopes that through the programs, voices and exhibits at the museum, that dialogue will be sparked, especially to a mainstream audience. Her goal is to facilitate a vision and open it up to others.

Linda’s background is an asset. She received her BA in International Relations and History, studying at both UCLA and the United States International University. She received her MA in International Business and Economics, studying at the Webster-Regents College, UK, and the London School of Economics. She has over 20 years experience as a senior level executive, advocate and activist for national and international projects and organizations. She has worked in a variety of corporate, public and non-profit settings in both the United States and abroad. She was the chief executive officer of the San Diego County Hispanic Chamber of Commerce. She also organized and collaborated in the development of various public art installations.

Thus, she has both the head for business and the heart for art, two talents that serve the museum well in its mission.

Like the founder of the museum, the renowned philanthropist, Deborah Szkeley, she also has a soft spot for children. One of the special events, that was important for Szekely, is a swearing in ceremony for children who become American citizens. Linda, herself, has three children.

As Linda herself states, “My vision is for the New Americans Museum to be a conduit, a facilitator for dialogue and storytelling around inclusion, immigrant values, and why these contributions continue to matter.”

To this goal, the museum has educational programming which include the children’s naturalization ceremony, school tours, an altar for Dia de los Muertos, honoring Gabriel Garcia Marquez, an emerging Arts Leaders Fellowship Program, the recording studio, the oral histories project where immigrants tell their stories, ongoing internship, docent, and volunteer opportunities, and their exhibitions with talks, forums, celebrations, and special events.

The next exhibit is “Maletas Migrantes” [Migrant Suitcases] which is an exhibition of 50 pieces made by 50 contemporary artists. It wants to draw attention to the contradictions, negotiations, and dialogues contained within the geographic and emotional crossing and consequent displacement of migrants, be it geographical, historical, or emotional. The curator is Ignacio Vasquez Paravano who comes from the Museum of Memory and Tolerance in Mexico City.

Of special interest to San Diego county K-12 and community college teachers is their yearly “My Immigrant Journey” essay contest where students write about their families’ or their own journeys coming to America and their new lives here. The best essays are honored and awarded prizes. The contest is held in the spring.

Finally, when asked what foot print or legacy she would like to leave behind, Linda thoughtfully replied, “I would like to help create a place “without walls” where ideas, tolerance, resilience, excellence, inclusion and innovation are represented through our combined immigrant experiences, and celebrated for them”