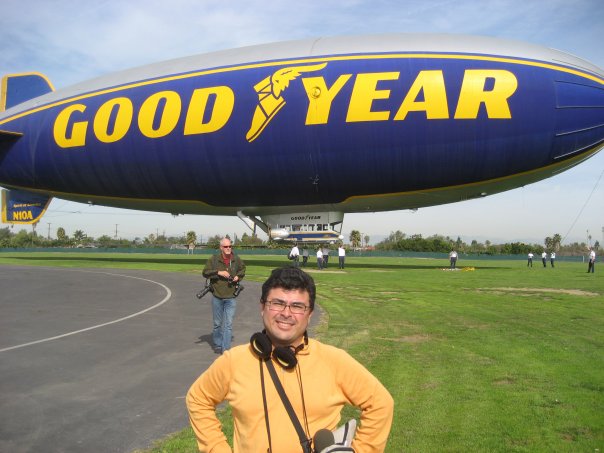 What makes Adolfo Guzman Lopez tick? That is a question I have asked myself for a long time. This is a man who went from an undocumented immigrant to graduating from UCSD, to Taco Shop Poet, to reporter for KPBS and presently KPCC, and finally to a student of the Torah, despite being raised Catholic.

Adolfo Guzman Lopez, 46, was born in Mexico City in 1969. He moved to Tijuana when he was three. At the age of seven, his mother brought him over to San Diego where she worked cleaning houses in the Pacific Beach/La Jolla area. Many days after school, Adolfo would hang out with her while she was working.

Adolfo was a bright and easy going child, and one of his mother’s patrons took an interest in them, so she enrolled him at Kate Sessions elementary school in La Jolla. Adolfo confided that as one of very few Mexicans, from an early age, he learned to get along and absorb all that was going on around him.

He attended Mission Bay High School and although he did well academically, because of his background, he felt it was sometimes hard for him to form lasting friendships. Yet, at the same time, he was growing apart from the rest of his family. He was in-between two worlds.

Spanish was still the dominant language at home, and his parents gave him little reinforcement when it came to his studies. They were so busy surviving; they didn’t have time to follow up with him. He said they were also strict and didn’t allow him to go out much. Despite that, Adolfo went on to become not only a successful student, but also fluent in English and Spanish, writing poetry in both languages.

While still in high school, he began to work and clean at the Oakwood Garden Apartments. Many retired Jews and WWII veterans lived there and Adolfo became friends with them. He liked to listen to their stories, and this had a positive influence on him. A good reporter likes to listen to others’ stories.

He was also positively influenced by one of his counselors in high school who saw how motivated and determined he was. This adviser encouraged him to apply to Muir College at UCSD where he was accepted and began in 1987.

Adolfo had a secret though. Until his senior year in high school, he had lived in San Diego as an undocumented immigrant. Finally, in 1986, when the amnesty law was passed under Ronald Reagan, he was able to get a green card. He became a citizen in 2000.

At UCSD, he studied political science and his mentors were Wayne Cornelius and Paul Drake. He attended many of the talks given at the Institute of the Americas and worked with La Voz Fronterista where he got the journalism bug. He graduated in 1994 with a degree in political science.

It was at UCSD that he met Adrian Arancibia and Miguel Angel Soria, and in 1994 the Taco Shop Poets were born. Inspired by the Puerto Rican poet Jesus Papoleto Melendez, they wanted to combine the spoken word with jazz, and perform “for the people” in taco shops, coffeehouses, etc. Mikey Figgins joined them on bass and Kevin Green on drums.

A year later Tomas Riley joined, and they began to tour around California and the United Stated, enjoying increasing popularity. They performed at many different places, including Grossmont College twice. The ride lasted until 2004 when they went their separate ways. Today, Adolfo, Adrian and Tomas occasionally get together to perform.

In 1993, Adolfo began working as a freelance reporter at KPBS and in 1996 became a news talk show producer. He also launched a daily Gen-X arts and culture show called, “The Lounge” which featured in studio performances. Sean Lennon was one of his guests. His success at KPBS led him to KPCC in Los Angeles where he has been working as an education reporter ever since.

Love also led him to LA and Orange County where he now lives in Long Beach. In 1992, he met Lysa Saltzman, and they began dating. She was studying to be a lawyer, and was later hired by a firm in Orange County. They married in 2002 and have two children, Jordan, 11, and Elyanna, 4.

They decided to raise the children as Jews, so Adolfo wanted to learn more about the Jewish faith. They joined Temple Israel in Long Beach. In 2011, he began to attend Saturday morning Torah classes with Rabbi Steven Moskowitz as a way to have more intellectual stimulation and connection. He told me he also enjoys being active working with various temple programs.

At first, he didn’t get the teachings of the Torah, but soon the spiritual lessons became important to him. He views himself as an observant non-Jew who is a part of the tribe. He is not sure yet if he wants to convert.
Who is Adolfo Guzman Lopez? Hardworking reporter and devoted family man? Bohemian poet? Mexican? American? Non-Jewish weekly student of the Torah? He is all of the above, and moves easily between the different worlds. I view him with admiration as a connecting bridge.