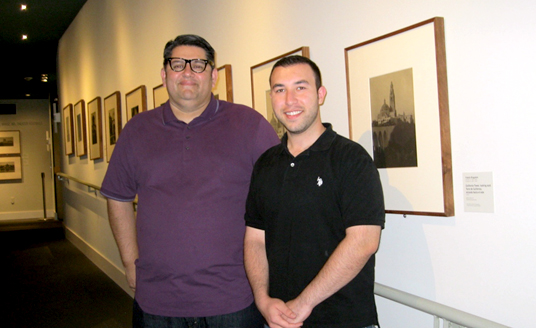 As an ESL teacher at Grossmont College, the majority of students in my classes are Iraqi and Iraqi Chaldean. Thus, I had a particular interest in the documentary, “Chaldean Voices”, which I saw Friday evening at “Documentaries on the Prado” at the Museum of Photographic Arts in Balboa Park. Chaldeans are Christian Iraqis. Most have fled their war-torn home and with the exception of Detroit, Michigan, the largest number of Chaldeans now live in El Cajon, California, and surrounding neighborhoods.

For those who have never heard of the Chaldeans, the film does a good job of introducing them, telling a little of their background, how they came to be in El Cajon and The United States, and the horrors many of them lived through before getting here.

My only complaint is that with its title, I expected the film to cover more of the population, and tell more stories. Instead, it focuses on the lives of several students at Diego Valley, a Learn4Life charter school in El Cajon.

It also focuses on the school and the innovative “one on one” teaching provided there. One important point is how the teachers strive to teach Chaldean and other immigrant students about being civically engaged. This leads to the process they went through to get the El Cajon City Council to enact September as Chaldean American month, starting in 2015.

I felt particularly interested in two of the students who were interviewed. One of them went to school and worked so many hours that he got by on just two or three hours of sleep. For me, this was a familiar story that many of my college students go through. It just shows the determination they have. The other student I found interesting was a very bright young woman who spoke of finding her way in this new land and trust issues after having been through so much.

The filmmakers, Peter Alkatib and Miguel-Angel Soria, made their film with heart and soul. Both of them possess an innate sweetness. Peter is full of youthful enthusiasm and a bit of naiveté. Miguel-Angel, a graduate of USD, also has that sweetness and enthusiasm, but his is also tempered by his many years of activism. Miguel-Angel was once a member and artistic director of the Taco Shop Poets. He also was the program director for the New Americans Museum, which celebrates immigrants who have arrived in the United States since WWII. Thus, it was important for him to have this minority voice heard and encourage empowerment to his students at Diego Valley, where he is also a teacher.

Even though I thought the film could have been more expansive in its range of voices, I liked the core of the film which showed that these young Chaldeans, like so many immigrant youth, struggle when they first arrive in the country as they navigate a new language and culture. It was heartening to see the majority of them receive their high school diplomas at the end of the film and to know that they are optimistic about their future in their new country.

The Chaldean Festival will take place in the Prescott Promenade Park in El Cajon, CA on Sept. 19-20, 2015 as part of Chaldean American Month in September.

¿Ya No Somos Como Los Centroamericanos?