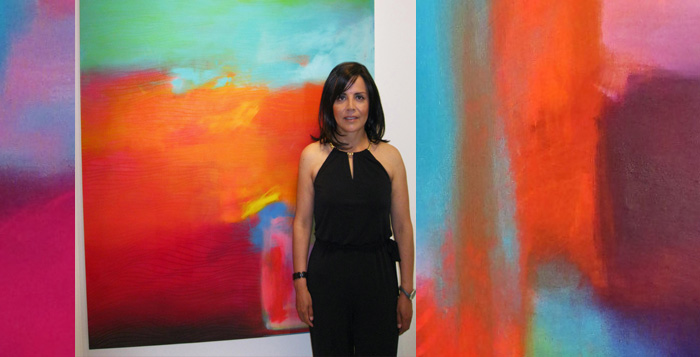 Tania Alcala says that to her colors are living beings that call to her. She sets the paints out in front of her and lets each color tell her which one to use next. She feels that her spirit guides her in painting and the energy is portrayed in her creations.

One can certainly feel that energy when gazing at her colorful paintings. Right now, two of her paintings are part of a women’s exhibit at the RB Stevenson Gallery in La Jolla. The exhibit runs from September 5th through October 17th. Her bright paintings really catch the eye.

Alcala, has had an unusual life. Born in Mexico City, she left in 1981 to get away from what she viewed as an oppressive society, especially to women. Driven by a natural curiosity and a desire to explore, she went to the Bay Area. She received a Masters degree in Arts and Consciousness and Transformative Arts form John F. Kennedy University in Berkeley, CA.

She started out as a realist painter, but being in the Bay Area and especially, San Francisco, opened her eyes to abstract painting, and thus, a new way to express her art. She has done abstract work ever since.

At the age of 35, she decided to study flying and became a commercial pilot. She worked for ten years as a pilot.

She flew a private jet for a real estate magnate and she also flew DC 9 cargo planes. Today, she still flies part-time, but is mostly devoted to her art as her success has grown. She feels that art is her calling in life, and wants to share that calling with others.