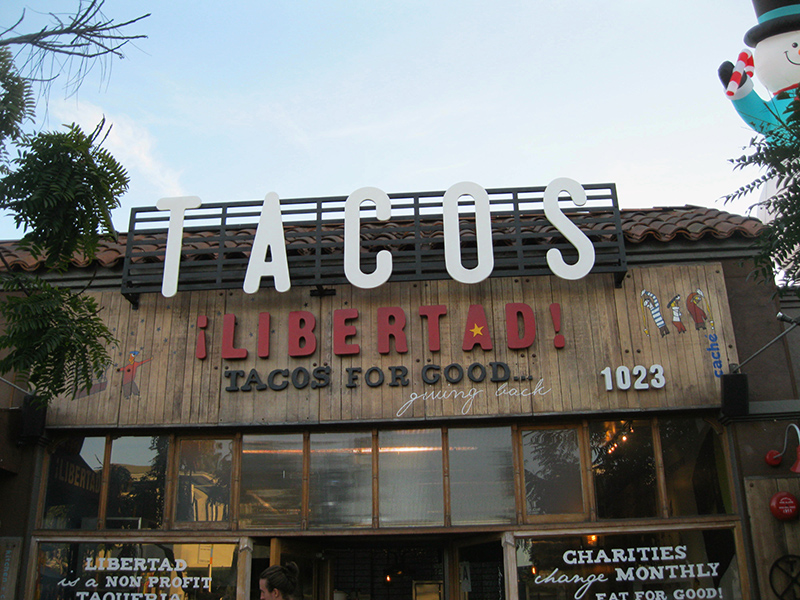 In my opinion, there is nothing better than a tasty taco, and if eating that taco also helps you do an act of social justice [Tikkun Olam], even better! I ate that tasty taco at Tacos Libertad which opened up in Hillcrest last May. It is part of the successful Cohn Restaurant Group. The Cohn Restaurant group includes The Prado in Balboa Park, Corvettes Diner in Liberty Station, Coasterra on Harbor Island, several Bo-beaus, and many others. Opening Tacos Libertad, as a not for profit taco shop, is one of David Cohn’s ways of giving back to the community as all the proceeds of the restaurant –after operating expenses- go to charity. They choose a different charity each month.

David Cohn had been looking for innovative ways to support and give back to a community that has patronized his many restaurants over the years. He continues a long held family tradition.  His late parents were deeply committed to social action as are his brothers and sister. Cohn and his wife, Lesley, are long time members of Temple Emanu-el as were his parents. Twenty years ago, his father began an annual High Holiday food drive at the temple. Cohn and his siblings have continued this tradition, and they have donated over 40,000 pounds of food to Father Joe’s Village.

Cohn also wanted to find other ways of giving back responsibly. While on a trip to Portland, Oregon, he discovered The Oregon Public House, a pub that donates its proceeds to charity. He decided the Cohn Restaurant Group should try that model in San Diego, and they opened Tacos Libertad.

There was a large property in Hillcrest available, so CRG opened up another BO-beau restaurant with Tacos Libertad taking up a small space next door. Behind, there is also a bar or as they call it, a “speakeasy” called Cache, where one can bring in their tacos to eat while having a drink.

How do they choose which charity to donate to each month? A special committee chooses a different charity every month. There is a link on the restaurant’s website, and the committee reviews the applications that are sent in. The chosen charity is guaranteed $3,000 for the month. Restaurants typically take up to a year or more to turn a profit and Tacos Libertad is no different, thus the restaurant group is making up the difference in the meantime. After, they will increase the donations as profits go up.

The committee tends to choose smaller organizations that are not as well known and may be overlooked. So far, some organizations that have received their help include Mama’s Kitchen, Meals on Wheels, San Diego Youth Services, International Relief Teams, and Humble Design which furnishes homes for the homeless. In addition, after hurricane Harvey and all the flooding hit Texas, they had one month that was “Tacos for Texas” and the proceeds went to help the many victims of that devastation. They are also open to donating to animal organizations.

The menu at Tacos Libertad is small, but has something for everyone. It is divided into vegetarian, seafood and meat tacos, plus sides. The vegetarian tacos are either grilled or tempura avocado and Portobello mushroom. The seafood tacos are octopus, grilled fish and shrimp tacos. The meat tacos are chicken, steak, two types of pork, and even a duck confit taco.

My group tried the chicken, steak, grilled fish, and shrimp tacos and they were all delicious. If you like spicy, only the shrimp tacos had a bite. The others would need some hot sauce.  We also ordered black beans and rice. I found the rice to be very flavorful. They choose the type of tortilla- flour or corn- for you, depending on the taco, but you can also tell them your preference.

Unlike other fancier Cohn restaurants, this is a low key operation where you order at the counter and they bring the food to you. Service was fast and friendly, with AJ Skojec and Joan Villanueva leading the crew.

For drinks, they offer Jarritos Mexican sodas and Blue Sky sodas, as well as various beers, wines, and “micheladas”. Seating is limited and not very comfortable, so the option of taking the tacos back to the beautifully decorated Cache is nice.

Except for Sundays when they open at 2:00 PM, Tacos Libertad does not open until 4:00 PM, so this is not a place to grab a fast lunch. They do stay open late- until 2:30 AM- so it is a good spot for late night munchies. It is nice to have a food establishment in San Diego where you know you can go and enjoy a good meal while giving back to others.

They are providing a positive footprint for other restaurants to follow.