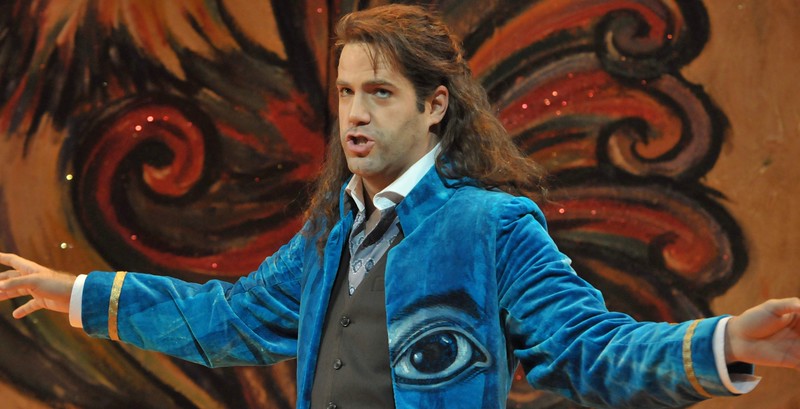 Inspired by the success from our safe drive-in performances of La bohème in the Fall, which heralded the return of live, in-person, opera to San Diego County since the start of the pandemic, and provided over 300 jobs to many who had not worked since March of 2020, San Diego Opera is pleased to announce a Spring season of safe, socially-distanced, drive-in performances.

The Spring Season opens on Saturday, April 24, 2021 at 7:30 PM with One Amazing Night, San Diego Opera’s annual concert of arias and duets with the San Diego Symphony. This year’s one-night-only event will feature soloists from the San Diego Opera chorus performing beloved operatic and musical favorites and is conducted by San Diego Opera’s Chorus Master and Music Administrator, Bruce Stasyna.

The next evening, on Sunday, April 25, 2021 at 7:30 PM, San Diego Opera will present the first of four performances of Rossini’s classic comedy The Barber of Seville, originally announced for the 2020 season. Additional performances are April 27, 30, and May 1, 2021 all at 7:30 PM. These performances will also feature the San Diego Symphony and San Diego Opera Chorus and will be a car and family-friendly 90-minute production. Like La bohème, patrons will watch the action live on stage from their cars, while video monitors placed throughout the parking lot provide close-ups of the action on stage. These drive-in performances of The Barber of Seville are made possible in part by the generous support of Lead Production Sponsor, Darlene Marcos Shiley. This project is supported in part by the National Endowment for the Arts.

The Company’s previously announced mainstage performances of Suor Angelica and Gianni Schicchi have been postponed to future seasons. The dētour Series production of Aging Magician has been rescheduled for the 2022 season at The Balboa Theatre.

“San Diego remains one of the few cities in the nation where music lovers can attend live, in-person, performances. Our La bohème was seen by over 4,200 patrons, employed 300 individuals, and resulted in zero cases of COVID-19. Inspired by these successes, we’re incredibly excited to present our annual concert One Amazing Night and four performances of The Barber of Seville. We will once again work with our musical partners, the San Diego Symphony, and this time use the incredible talent of the San Diego Opera Chorus in both the concert and the opera,” shares San Diego Opera General Director, David Bennett. “I know many of you were excited to see the double-bill of Suor Angelica and Gianni Schicchi with Stephanie Blythe as Principessa and in the groundbreaking debut of the title role. She remains committed to performing this with us when we present them when we return to the theatre. Aging Magician, our other announced opera this season, is now part of the 2021-2022 season.”

Since the emergence of COVID-19 San Diego Opera has continued to closely monitor the recommendations of public health and government officials and realized that a traditional season in a traditional theatre is impossible to contemplate right now. Because of this, the Company developed this alternative plan after learning about other safe and successful drive-in live performances in both Europe and the United States. Like previous San Diego Opera drive-in events, patrons will remain in their cars for the duration of the performance and socially distanced protocols will be enforced should the patron need to briefly leave their vehicle. Patrons will be able to listen to the opera through their car stereo which will be broadcast via an FM transmitter. Screens will also enhance audience members experience with footage of the singers on stage. The Company’s last drive-in offering, La bohème, resulted in zero transmissions of COVID-19 between the artists, staff, and public and was seen by over 4,200 people.

Last presented by the Company in 2012, and originally scheduled for the 2019-2020 before being rescheduled to this season due to COVID-19, these performances of The Barber of Seville mark important debuts by baritone David Pershall as Figaro, tenor Carlos Enrique Santelli as Count Almaviva, and bass Peixin Chen as Don Basilio. They are joined by returning mezzo-soprano Emily Fons as Rosina, who was last heard in San Diego as Cherubino in 2018’s The Marriage of Figaro. Also returning is bass-baritone Partick Carfizzi as Doctor Bartolo, who was last heard as Major-General Stanley in 2017’s The Pirates of Penzance. Rounding out the cast is mezzo-soprano Alexandra Rodrick as Berta in her Company debut, returning bass-baritone Joshua Arky as Fiorello, and returning baritone Michael Sokol as the Sergeant. San Diego Opera’s Chorus Master and Music Administrator Bruce Stasyna returns to the podium for these performances in his main stage conducting debut, having last been heard on piano for 2020’s drive-in holiday choral concert preceding the film of All is Calm. Stage Director Keturah Stickann returns after directing the drive-in season opener, La bohème. The costume designer is Amanda Seymour. The costumes come from a production that was originally created as a co-production between Opera Philadelphia and the Opera Theatre of Saint Louis. It is now owned by Utah Opera. The lighting designer is Chris Rynne. The sound designer is Ross Goldman.

The Barber of Seville follows the exploits of Figaro, “barber by day, matchmaker by night” as he aids Count Almaviva in wooing the beautiful Rosina, ward of the manipulating Dr. Bartolo who intends to keep Rosina to himself and marry her. Figaro infiltrates Bartolo’s guarded estate with the Count, disguised first as a drunken sailor and then as a replacement for music teacher Don Basilio. This riotous romantic comedy will keep audience members in stitches with fast action, pranks and instantly recognizable music including its famous overture, the baritone patter song Largo al factotum, and the coloratura aria Una voce poco fa. The Barber of Seville was composed by Gioachino Rossini with libretto by Cesare Sterbini and is based on the play Le Barbier de Séville by Pierre-Augustin Beaumarchais. The opera received its world premiere at the Teatro Argentina, Rome on February 20, 1816.

Subscribers who have already subscribed to The Barber of Seville are being contacted directly by the Company to determine which performance they wish to attend. Preferred parking areas will be provided for subscribers based on their current seating sections within the Civic Theatre.

Tickets are currently on sale for subscribers only. Tickets for non-subscribers will be on sale at www.sdopera.org/tickets starting March 1, 2021. Previous drive-in presentations have sold-out. Guests are allowed to bring as many passengers as their car has seatbelts. San Diego Opera recommends guests only attend the opera with people they have already been quarantining with. All guests are required to watch the opera from their vehicle and wear face coverings if they briefly need to leave their vehicle to use the restroom facilities. Patrons may bring in food and drink as there are no concessions for sale. The non-subscriber tickets for One Amazing Night begin at $100 with a limited number of premium parking spaces at $150. Tickets for The Barber of Seville begin at $200 per car with a limited number of premium parking spaces at $300. Every ticket sold to San Diego Opera’s 2020-2021 season includes a Ticket Purchase Guarantee. This means, if for any reason, a patron or guest feels sick or unsafe, or San Diego Opera finds it impossible to safely move forward with our plans, our Patron Services department will work with tickets holders to reschedule seats or find an agreeable solution.