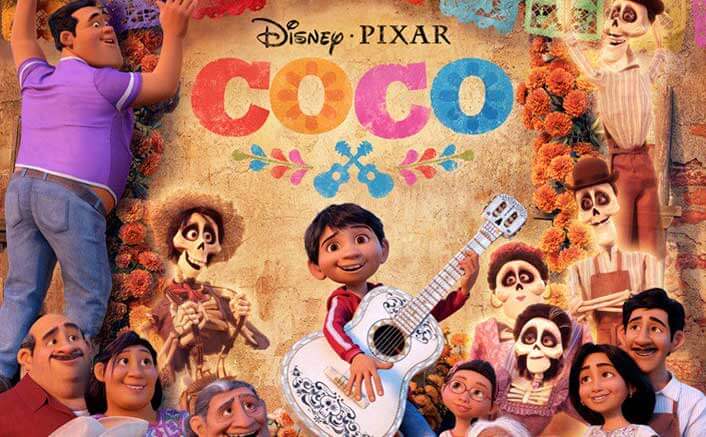 The Disney/Pixar Companies have redeemed themselves after the 2013 debacle of requesting to trademark, “Dia de los Muertos”, with their new movie, Coco. In this movie, they finally get it right by hiring a mostly Latino cast and working with Latino consultants.

Coco works on many levels. First, it is a delightful children’s movie with beautiful and colorful animation, lively music, and sight gags to please little tykes. It is also an educational film, introducing audiences who don’t know, to the meaning and traditions of of Dia de Los Muertos, a cultural, sometimes religious, spiritual, and familial holiday in Mexico and Latin America. November 1st and 2nd are days that many families visit cemeteries and/or build altars in their homes, decorating them with pictures of the deceased, flowers, candles, food, etc. The movie can bring about a discussion between Anglos and Latinos who tend to have very different views of death and the afterlife.

Thus, it is also a movie for adults as it touches upon themes of abandonment, the pain of vindictiveness and how not forgiving can affect generations to come, and how cutthroat people can be to achieve fame, even supposed beloved celebrities. It also references and gently makes fun of Latino icons, such as Frida Kahlo.  I thought the revered singer in the movie [Ernesto de La Cruz] bore a striking resemblance to the late, great Jorge Negrete, a Mexican singer/actor during the Golden Age of Mexican Cinema.

Finally, who knew Benjamin Bratt and Gael Garcia Bernal could sing? Their voices and duets were a pleasant surprise as were the music and key song, “Remember Me”.

The movie is about a twelve year old boy Miguel, voiced by talented newcomer, Anthony Gonzalez, whose family are shoemakers, and because of an incident that happened long ago, forbid music in their home. However, music is in Miguel’s genes and his idol is the late and revered singer, the fictional Ernesto de la Cruz.

Miguel finds an old family photo and because of the guitar in the picture, thinks that de la Cruz is his great-great Grandfather. Coco is actually the name of Miguel’s great grandmother who sits quietly in a world of her own, while his grandmother fiercely rules the roost, denying all music in the household.

There is a surprise ending which I won’t spoil for you here. By the time Miguel finds out the truth, he has had many adventures in both the living world and accidentally crossing over to the dead or spirit world where he meets many of his ancestors and their spirit guides. He also meets his great-great grandfather and finds out why music has been prohibited in his house. He has a very touching scene with Coco when he comes back to the living world.

It is also a pleasure to see how many well-known Latino “showpeople” participated in the movie. Besides Bratt and Garcia Bernal, San Diego’s own Herbert Siguenza plays the dual roles of Miguel’s dead Uncles Tio Oscar and Tio Felipe as well as being a cultural consultant on the film. Other people of note include Luis Valdez, Cheech Marin, Alfonso Arau, Renne Victor, Jaime Camil, Gabriel Iglesias, and Edward James Olmos to name a few, giving Coco quite a pedigree.

The movie is co-directed by Lee Unkrich and Adrian Molina. It is in wide release in San Diego and some movie theaters are showing it in both English and Spanish versions.