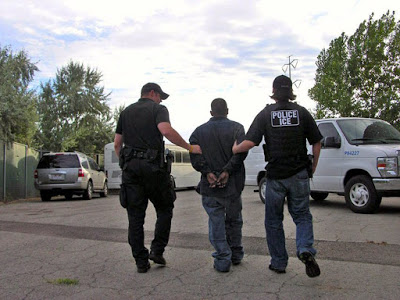 Immigration officials are set to deport approximately one million immigrants who entered the United States illegally, according to a Trump administration official.

Ken Cuccinelli, former Virginia attorney general and acting director of the U.S. Citizenship and Immigration Services, cited the one million statistic in an interview with CBS’ “Face the Nation” on Sunday.

“They’re ready to just perform their mission, which is to go and find and detain and then deport the approximately one million people who have final removal orders,” said Cuccinelli.

“They’ve been all the way through the due process and have final removal orders. Who among those will be targeted for this particular effort … is really just information kept within ICE at this point.”

When moderator Margaret Brennan pointed out that the Obama administration deported more people than the Trump administration, Cuccinelli agreed and offered an explanation.

“Thus far, that’s right,” replied Cuccinelli saying that immigration authorities have been “swamped” with work on the border crisis, adding that “we focus so much on the Border Patrol.”

USCIS has approximately 19,000 employees and oversees lawful immigration into the United States, including the processing of requests for immigration benefits.

President Donald Trump previously announced June 17 on Twitter that the raids would begin that week. He then delayed the raids after congressional Democrats asked for more time work on legislation.

At a June 29 press conference in Japan, he said the raids would begin after July 4, “unless we do something pretty miraculous, but the Democrats it seems to me they want to have open borders.”

“We will be removing large numbers of people,” Trump added.

Cuccinelli’s comments came as Trump garners controversy both for the planned ICE raids and for the treatment of undocumented children at detention centers.

The revelations received denunciations across the political spectrum, including among evangelical leaders and groups.

“Overcrowded and unsanitary conditions are inappropriate for anyone in detention, but particularly for children, who are uniquely vulnerable,” stated the EIT letter.

“As you address these urgent concerns, we are committed to praying for you, even as we also pray for vulnerable children and families, for the churches, ministries and organizations assisting them in both the U.S. and Mexico, and for Homeland Security officials and other public servants charged with protecting the country and humanely processing asylum seekers.”

Last week, however, Samuel Rodriguez, president of the National Hispanic Christian Leadership Conference and an EIT member, toured one of the border patrol facilities and said the conditions he found there were not as poor as reported.

“I am in no way creating a moral equivalence to my following statements. I am just giving you an example. It looked a lot more like as if it were a summer camp environment as it pertains to snacks being ready, cots, that sort of thing, television stations. It looked more like that than anything else. Again, it’s not an ideal world because it is still a detention center. It had that sort of vibe, that sort of atmosphere to it,” he said.